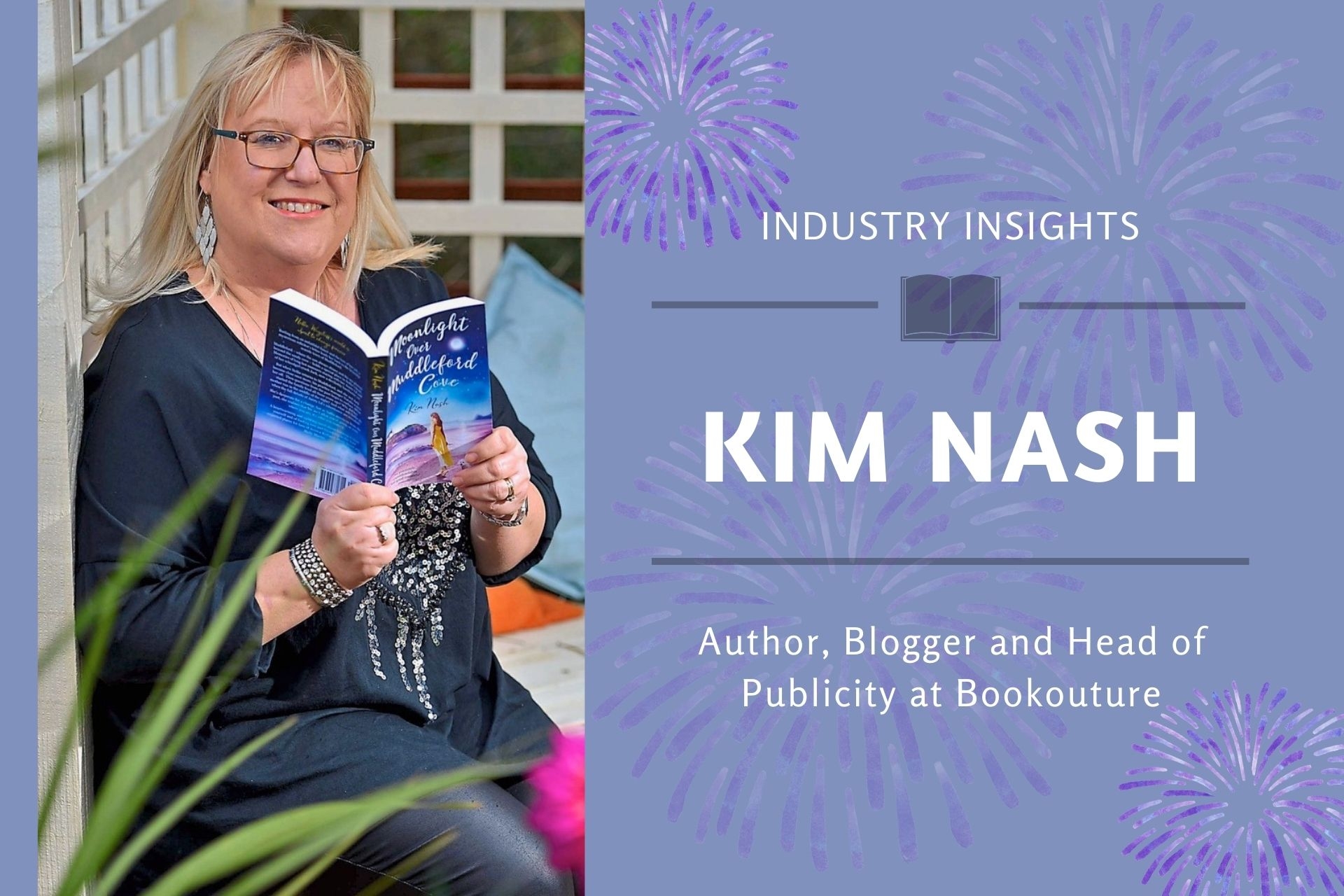 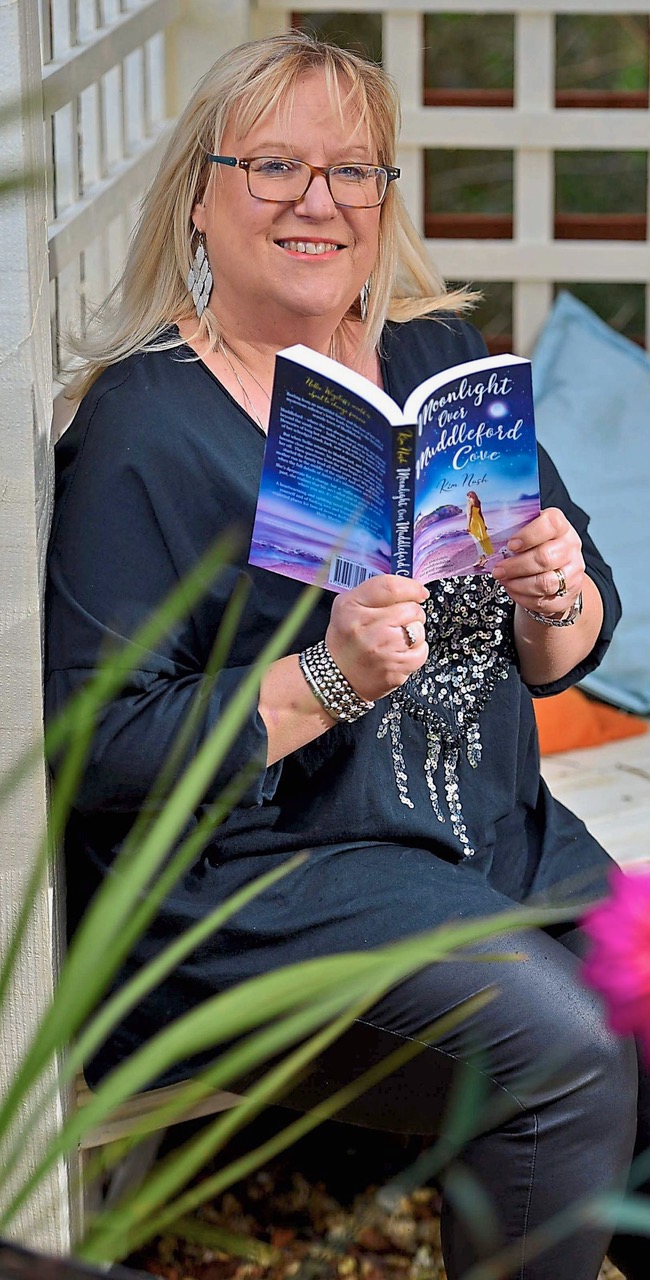 The team at LoveReading are in awe of Kim Nash, she is a bit of a wonder in the book world and really knows her stuff! We thought she would be a perfect industry insight into the world of publishing as like us, she just adores sharing the book love.

Kim is an author of uplifting, funny, heartwarming, feel-good, romantic fiction and has always wanted to write books since she was a little girl.

Her latest book is Moonlight Over Muddleford Cove.

Her book published in June 2020, Sunshine and Second Chances, was shortlisted for the 2020 Amazon Kindle Storyteller Award.

She lives in Staffordshire with son Ollie and English Setter rescue dog Roni, is Head of Publicity for publisher Bookouture (part of Hachette UK) and is a book blogger at www.kimthebookworm.co.uk.

Kim won the Romantic Novelists Association's Media Star of the Year in 2016, which she still can't quite believe. She is now quite delighted to be a member of the RNA as an author.

When she's not working or writing, and in non-Covid times, Kim can be found walking her dog at Cannock Chase, reading, writing, standing on the sidelines of a football pitch cheering on Ollie, and binge watching box sets on the TV. She's also quite partial to a spa day and a gin and tonic (not at the same time!) Kim also runs a book club in Cannock, Staffs and organises local and national reader/author events.

Amazing Grace was her debut novel which came out in April 2019.

Escape to Giddywell Grange is Kim's second novel and was published in September 2019.

Sunshine and Second Chances is Kim's third novel and was published in June 2020.

Moonlight Over Muddleford Cove is her fourth book and was published in March 2021.

When did your love for the written word begin?

I’ve always loved books. I wanted to be an author when I was a child and devoured every Enid Blyton book going. Then I grew up and moved onto Danielle Steele and her books took me on an emotional rollercoaster. I wanted to be able to do that for someone else. I thought though that to be an author you had to live in a big house by the sea! Your desk would site overlooking your beautifully tended garden with colourful blooms with the sea beyond that. That’s when I thought inspiration struck! If I couldn’t be an author, my other dream was work for a book publisher because I though that involved sitting in a swanky glass office in a comfy chair and you got to read books all day long. Since working for a publisher, I had discovered that this is not how it works.

Do you have a favourite book from childhood, how did it make you feel, and have you read it as an adult?

I loved Enid Blyton as I said above. The Naughtiest Girl in the School was one of my favourites and I always wanted to go to boarding school because they got chests sent from home full of tuck and got to play lacrosse which sounded quite posh to me because only played netball and hockey at my comprehensive school.

Tell us about being a book blogger, how did it start, and what one piece of advice would you give to new bloggers?

I read a book called A Spring Affair by Milly Johnson and the protagonist’s story really resonated with me. I wrote to the author to tell her, thinking she’d never write back and within an hour, I had an email back and I’ll never forget her words. She said “You lady, are the reason I write books.” We chatted backwards and forwards and I said that I was thinking of starting a book blog and she said that she thought it was a fab idea and she’d put the word out to some of her author friends and that’s where it all began.

When did you know you wanted to work in publishing?

I always wanted to as I said in my first answer, but I never thought it was possible. I didn’t go to University and don’t have an English Literature degree and also don’t live in London and that’s where most publishing jobs are. I just never thought it was an option for me so went on to other things and had a career in sales, marketing and PR. When I started to book blog, I mixed with authors and got to know a few publishers and just kept thinking what an amazing job it would be.

Tell us about Bookouture and your role there.

When Oliver Rhodes who started Bookouture asked me to review one of his books, I’m not sure what made me do it, but I put at the end of the return email – if you ever hear of anyone in the publishing industry who needs some freelance support, I’d be grateful if you could let me know. We chatted and I joined on that basis to support him and to grow the social media side and blogger community. I was taken on part-time, then full-time and I’m still here.

My job now is Head of Publicity where my role is to manage my team to make sure that we get Bookouture books and authors in the forefront of everyone’s mind when they are looking for books to read both online and offline. We want our readers to know that when they pick up a Bookouture book, it’s a blooming awesome read.

Also we want authors to think about Bookouture as a publisher of choice, that our attractive royalty rates and our author offering and the way that we publish, is as attractive if not more than other publishers.

You run a book club, what do you look for in a good book for your club to read?

We’re actually a very different book club, because we don’t all read the same book. Mostly because I’m quite stroppy and don’t like to be told what to read. So we all get together, either on zoom these days, but better obviously when we can do it in person and discuss what we’ve read since the last time we met. We cover many many books and if we only read one, we’d only talk about that one.

You also write your own books, do you meticulously plan your novels, or does the story appear as you write?

I’d like to say I plan them meticulously but I really don’t. The words just come to me as I’m typing. I do have a rough plan of what I know so far and I start really with a setting and a main character and the rest comes to me as I’m writing. I do make notes on post-its of things that I want to happen in certain chapters and have diagrams and mind maps in notebooks to show my character arcs so I suppose that’s a little bit of planning.

Who have been your book world inspirations?

Milly Johnson, Carole Matthews, Miranda Dickinson who has been incredibly supportive along my writing journey, a lot of the Bookouture authors. Nicola May is a good friend and complete inspiration and it’s so lovely to watch her career grow over the years I’ve known her.

Oliver Rhodes who started Bookouture, because he taught me that actually anything was possible and that if I wanted to be an author, then I should go for it. He also gave me a chance in the publishing world when most other publishers wouldn’t have ever looked at a single mom who lived in Staffordshire and hadn’t got the background that a lot of people in publishing seem to have.

You have had such a varied career in the book world, has there been a particular highlight?

So many! It was amazing to get the Media Star of the Year award at the RNA awards although that was a few years ago now so I should probably stop mentioning it. When Bookouture got their first Amazon number one – with Angela Marsons’ crime thriller Silent Scream – that was incredibly special. It’s been amazing to watch Bookouture grow over the years from a one-man start-up to a multi-million pound organisation with nearly 40 staff and still growing. I’m super proud of what we’ve achieved.

My first book Amazing Grace being published by Hera Books in 2018 was very special. Also, in my writing career, last year my first self-published book Sunshine and Second Chances was one of five books nominated for the Amazon Kindle Storyteller Award which was pretty darn cool.

If you were only allowed to read one book for a year, what would you pick and why?

Such a hard question but I’m going to go for A Spring Affair by Milly Johnson because that is the book that literally changed my life and I thank my lucky stars every day for being able to work in this industry that I love so much sharing the book love.

If you enjoyed this, click here to check out our other Industry Insight Q&As.