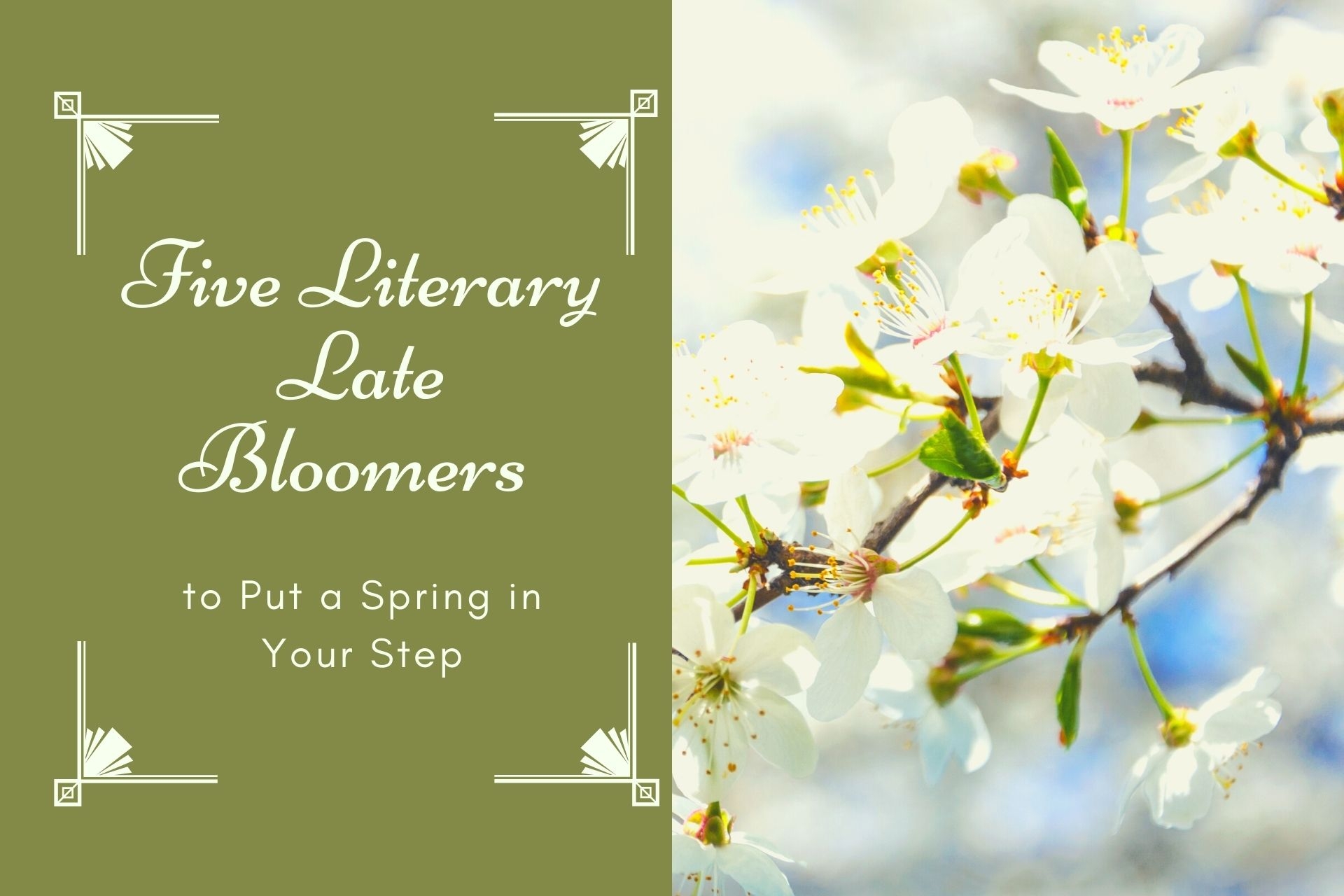 5 Literary Late Bloomers to Put a Spring in Your Step

At last! Spring is finally springing after what feels like an absolute age and, while we’ve been enjoying a whole bunch of books by fresh young writers, we’ve also been thinking about all those literary greats who weren’t exactly spring chickens when they came to writing, and boy, we’re delighted they did.

“It is never too late to be what you might have been.” So wrote trailblazing George Eliot, expressing a sentiment borne out by her own life. Born Mary Ann Evans in 1819, George Eliot chose her pen name to circumvent the prejudice of her day (that women were only capable of writing light-hearted romance), and to distinguish her novels from her work as an editor, translator and critic. Though she had little formal education after the age of sixteen, Eliot had access to the library of the estate her father managed, where she immersed herself in classical literature.

As a young woman, Eliot befriended a free-thinking, dissenting family and, as a result, her religious father threw her out. Following his death, and after a period in Geneva, she moved to London in 1851 and - unusually for a woman - became the assistant editor of campaigning left-wing journal The Westminster Review. In the same year, she met the married philosopher and critic George Henry Lewes and (never one to follow convention) they moved in together in 1854. Five years later, at the age of forty, Eliot’s first novel, Adam Bede, was published to great acclaim, and amidst much speculation as to who wrote it. This speculation (and a pretender to the novel’s authorship) led to Eliot revealing her identity. Despite controversy around her private life, her subsequent six novels were also hugely successful, and to this day her work frequently appears in “best novels of all time” polls, especially Middlemarch, which was written when she was 52.

A mother-daughter exchange about the unending nature of education in Laura Ingalls Wilder’s Little House in the Big Woods expresses the notion of it never being too late for anything. It goes like this:

Laura Ingalls: Ma, how long is all this learning going to take?

Caroline Ingalls: We start learning the minute we're born, Laura. And if we're wise, we don't stop until the Lord calls us home.

After a childhood moving around the American Frontier and teaching at the tender age of fifteen, Wilder’s writing career began when she was married and living on Rocky Ridge Farm. Recognised as an expert on rural living, she was a columnist and editor for Missouri Ruralist from 1911 until 1920. With encouragement from her daughter, and living in the spectre of the 1929 Stock Market crash, Wilder turned her hand to writing an account of her pioneering childhood, later expanded and adapted into what became Little House in the Big Woods, which was published in 1932 when she was sixty-five. Eight “Little House” books were published during Laura’s long life, bringing her family security and bestowing her with an abundance of accolades and awards.

From a children’s book doyenne on one side of the Atlantic, to Norfolk notable Anna Sewell. Though her mother, Mary Wright Sewell, was a successful children’s writer and poet (Mother's Last Words sold a whopping million copies globally), Anna didn’t take up the writing mantle until much later in life. When her father’s shop business failed, the family moved to London where, at the age of fourteen, Anna fell and injured both ankles, leaving her with a lifelong dependency on crutches and carriages, which contributed to her love of horses.

After helping her mother with temperance and abolitionist campaigns, and many relocations, the family returned to Norfolk in 1866, where Anna wrote Black Beauty, largely dictated to her mother during a painful illness that saw her confined to bed. Published in 1877 when she was 57, it’s a true thoroughbred that stands the test of time, with themes of kindness, empathy and animal welfare that were way ahead of its day. Sadly, Anna died just five months after the book was published but, thanks to her passion and persistence in the face of physical pain, she’s since delighted legions - and generations - of horse-lovers.

While her short stories have been attracting attention and awards since 2011 (to see why, read her Supporting Cast anthology), it wasn’t until 2016, at the age of 56, that Kit de Waal’s first novel was published, and what a novel it is. Recipient of the 2017 Irish Novel of the Year Award, and shortlisted for the Costa Book Award and the Desmond Elliott Prize, My Name is Leon is a stunning story of love, loss, identity and brotherly bonds that exposes the shortcomings of the child welfare system, of which Kit has deep knowledge. Born in Birmingham to an Irish mother and Kittitian father, she worked in criminal and family law for fifteen years, was a magistrate for several years and has written training manuals on adoption and foster care.

Since the publication of My Name is Leon, Kit’s second novel, The Trick To Time, was published in 2019, while her clever, uplifting debut for young adults, Becoming Dinah came out in the same year. Alongside being impressively prolific, Kit is generous with her expertise and good fortune. Three days after securing a publishing deal for My Name Is Leon, she set up a scholarship for a writer from a disadvantaged background using some of her advance. The scholarship provides a fully funded place for a student to study on the Birkbeck, University of London, Creative Writing MA.

From her bestselling Whitbread (now Costa) Book of the Year debut Behind the Scenes at the Museum, to her wise 2019 thriller Transcription, Kate Atkinson has a remarkable talent for exploring huge themes that get to the heart of what it is to be human in elegant, page-turning style. But, despite reading English Literature at the University of Dundee, and writing fiction for magazines through her thirties, her first novel wasn’t published until she was 44. In a radio interview with US-based NPR, she points out that coming to writing later meant, “I didn't have, you know, the emotional turbulence, a lot of what you go through in your 20s and 30s. I was on a much steadier keel, in a way, and I had more space to write. I think often when you're in your 20s and you start to write, you sort of write your way through your life as you live it, whereas I kind of got to a stage where I had a little bit more experience under my belt.”

With a portfolio ranging from clever crime novels (such as her Jackson Brodie books, adapted for TV as the BBC Case Histories series), to contemporary gems that pose conundrums, any new novel from Atkinson is guaranteed to be 100% fresh and thought-provoking.