The Boy from the Wild, by Peter Meyer

The Boy from the Wild needs a health warning:

‘Caution, this book may lead to wanderlust and adventure-envy’.

If Peter Meyer’s fascinating new autobiography doesn’t inspire you to see the world and follow your dreams, then nothing will.

Meyer’s memoir about growing up on the Karkloof Valley Nature Reserve, a 1,000-hectare reserve in ‘Valley of Heaven’ area of KwaZulu-Natal, South Africa, is told with charm, wit and honesty. His book recounts boyhood adventures with an infectious glee and a terrific knack for scene setting; readers are transported to the expanse of the African bush, where days are joyful, tear-jerking and terrifying in equal measure.

Meyer’s father, a successful British property developer, purchased the reserve in the early 1980s. Several years later the reserve was reborn as ‘Safari World’, the first wildlife theme park of its kind and a major international attraction that could be described as a real-world Jurassic Park. 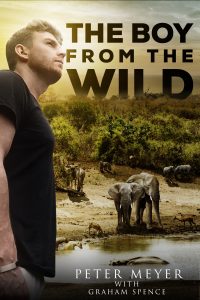 Meyer’s life was dramatic from the outset. Born to a South African mother and British father, Meyer survived a traumatic birth that almost killed mother and child, and a near-fatal unobserved plunge into a swimming pool as a baby. Before he was eight years old, Meyer had fended off rhino attacks, had survived “uncomfortably close” encounters with buffalo and wildebeest, and twice been bitten by seriously venomous snakes. With a baby elephant, warthogs and friendly ostrich among his childhood ‘pets’, his early years nurtured a lust for adventure and excitement.

Meyer clearly inherited his father’s adventurous streak, along with a rebellious nature (there’s a healthy sense of mischief and self-deprecating humour throughout, which is wonderful). But the book is immeasurably sad at times, too. The deaths of his loved ones – both human and animal – are told with a raw and brutal honesty that is both refreshing and heartbreaking.

Meyer is now an actor, who has starred in films alongside Brad Pitt. His attributes his success in adult life to the freedom he was given to grow – physically and emotionally – as a youngster.

If there was ever a book that lends itself to the Big Screen, then The Boy from the Wild is it. But forget Brad Pitt as the lead – that role should fall to Peter Meyer.

The Boy from the Wild by Peter Meyer is out now, priced £9.99 in paperback and £3.99 as an eBook. It is available for sale on Amazon UK. Visit www.petermeyer.com