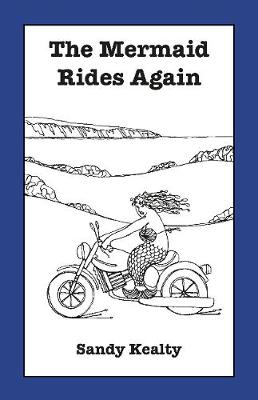 The Mermaid Rides Againis full of lyrical and funny poems, honed from years of performance and inspired by an adventurous life. Following the success of her first poetry volume,'The Mermaid is Unimpressed', this secondvolume isfilled with poems covering the thrills of riding pillion on motorbikes to embarrassing entanglements with past lovers, including such topics as the joy of cake to the perils of leaving granny by the cliff edge. With a wry wit, sarcastic and tender, Sandy Kealty guides the readerwith a narrative on the grit that formed the pearl of each poem. She writes in free verse, and sometimes in rhyme but always with an ear to be performed aloud, from her experience as a musician and in performing her poems to live audiences. A wise and intelligent poet, reflecting back on life, while analysing the state of the nation. With fantastic vocabulary and just the right word in the right place, she writes tight andpunchy poems, that are also reflective and witty, formed from personal experience on her life that will also resonate with many. Poems to read aloud, poems to perform, poems to heal, poems as a gift, poems for mum, poems for a daughter,poems to make you smile, poems to make you laugh, poems for women, poems for men. Read them at home, on the train or out loud in a park! For more information see the publisher website: www.beachybooks.com

Sandy Kealtys writing is aimed at performance, and now she thought it time to commit some work to the page. She started performing seriously in Whitstable in the mid nineties, having been left alone on a cliff top with very little warning, and has continued in the same vein since moving to the Isle of Wight, a place which has proved a joy and an inspiration to her. Sandy has appeared many times at Island venues, as a poet and as a community musician. Truly international, Sandy has read her poems far and wide including the Isle of Wight Literary Festival and Ventnor Fringe, to aerospace engineers in San Diego, and at a poetry cafe in Santa Rosa.

More About Sandy Kealty
Add To Wishlist
Buy from our bookstore and 25% of the cover price will be given to a school of your choice to buy more books.