The perfect gift for fans of classic Hollywood - ideal for fashion, film, and design aficionados. From one of the great bon vivants of our age comes this witty memoir of an extraordinary life lived among a glittering social set. Acclaimed designer and founder of Pret-a-Porter Marc Rosen shares in this delightful reminiscence the stories of his encounters with the great beauties, talents, and personalities of the last 50 years. Marc has rubbed shoulders with everyone - from Hollywood royalty (including Helen Hayes, Bette Davis, and his own wife, Arlene Dahl, the girl for whomTechnicolor was invented) to actual royalty (Princess Grace of Monaco, the Romanovs) to the moguls of the beauty and fashion worlds (Charles Revson, Karl Lagerfeld) over the course of his brilliant career.

Marc Rosen has written a memoir that was published two weeks ago. Rubbing Shoulders; My Life with Popes, Princes, Moguls, and Movie Stars. Last week, the end of the Season, Marc was being feted across the island by the Palm Beach Who's Who with book signings, dinners, and an interview at The Four Arts. --New York Social Diary, April 19th, 2016 Rubbing Shoulders is not a conventional memoir, it is a drive-by shooting--a smart and sassy compilation of insights into famous people we thought we knew. --Richard Turley Orb Magazine, April 25, 2016/Vol. 3 No. 5 Rosen has also been fortunate enough to cross paths with many interesting people. So many, in fact, that he's recently written a book about his encounters called Rubbing Shoulders. It's kind of a fun summer-reading book, he says. Most of the stories I just enjoyed reading out loud. The real challenge was to sustain my voice, but I tried to write it through the eyes of someone who had a bit of wonderment. --Alex R Travers Quest Magazine, April 7, 2016

Marc Rosen is a seven-time Fifi Award winner for his work in fashion and beauty packaging and the author of the successful coffee table book, Glamour Icons ISBN 9781851496600. A professor at The Pratt Institute, he is also a successful entrepreneur who founded Pret-a-Porter. His designs may be found in the permanent collections of the Museum of Modern Art in New York City and La Musee de la Mode in Paris, France. He lives in New York City and upstate New York. 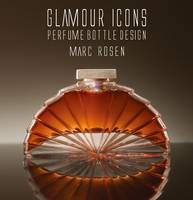 View All Books By Marc Rosen