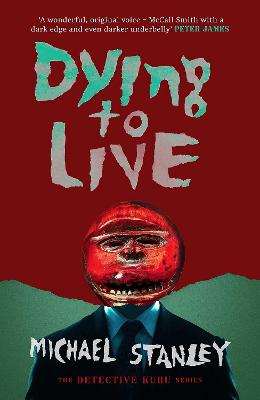 When the body of a bushman with puzzlingly young organs is stolen from the morgue and a local witch doctor goes missing, Detective Kubu becomes involved in a life-threatening case. 'Richly atmospheric ... a gritty depiction of corruption and deception' Publishers Weekly 'The African Columbo ... a smart satisfyingly complex mystery' Entertainment Weekly 'A wonderful, original voice - McCall Smith with a dark edge and even darker underbelly' Peter James _______________ When the body of a Bushman is discovered near the Central Kalahari Game Reserve, the death is written off as an accident. But all is not as it seems. An autopsy reveals that, although he's clearly very old, his internal organs are puzzlingly young. What's more, an old bullet is lodged in one of his muscles ... but where is the entry wound? When the body is stolen from the morgue and a local witch doctor is reported missing, Detective 'Kubu' Bengu gets involved. Kubu and his brilliant young colleague, Detective Samantha Khama, follow the twisting trail through a confusion of rhino-horn smugglers, foreign gangsters and drugs manufacturers. And the deeper they dig, the wider and more dangerous the case becomes... A fresh, new slice of 'Sunshine Noir', Dying to Live is a classic tale of greed, corruption and ruthless thuggery, set in one of the world's most beautiful landscapes, and featuring one of crime fiction's most endearing and humane heroes. _______________ 'Detective David Kubu Bengu is a wonderful creation, complex and beguiling. Compelling and deceptively written' New York Journal of Books 'My favourite writing duo since Ellery Queen' Ragnar Jonasson 'Dying to Live is a skilfully plotted story of greed and its consequences; making the case for Detective Kubu absorbing, like the Botswana backdrop' ShotsMag 'Under the African sun, Michael Stanley's Detective Kubu investigates crimes as dark as the darkest of Nordic Noir. Call it Sunshine Noir, if you will - a must read' Yrsa Sigurdardottir 'Intelligent, dark and compelling - among the best of today's crime fiction' Quentin Bates 'Fascinating, dark and beautifully written ... Kubu is a detective worth knowing. More please!' Northern Crime

Michael Stanley is the writing team of Michael Sears and Stanley Trollip. Both were born in South Africa and have worked in academia and business. Stanley was an educational psychologist, specialising in the application of computers to teaching and learning, and is a pilot. Michael specialises in image processing and remote sensing, and teaches at the University of the Witwatersrand. On a flying trip to Botswana, they watched a pack of hyenas hunt, kill and devour a wildebeest, eating both flesh and bones. That gave them the premise for their first mystery, A Carrion Death, which introduced Detective 'Kubu' Bengu of the Botswana Criminal Investigation Department. It was a finalist for five awards, including the Crime Writers' Association Debut Dagger. The series has been critically acclaimed, and their third book, Death of the Mantis, won the Barry Award for Best Paperback Original mystery and was a finalist for an Edgar award. Deadly Harvest was a finalist for an International Thriller Writers' award. A Death in the Family and Dying to Live are the latest in the Detective Kubu series, published in 2017 by Orenda Books. For information about Botswana, the book and its protagonist, and to sign up for an occasional newsletter, please visit www.detectivekubu.com. Visit Michael Stanley on Facebook at www.facebook.com/MichaelStanleyBooks, and on Twitter @detectivekubu

More About Michael Stanley
Add To Wishlist
Buy from our bookstore and 25% of the cover price will be given to a school of your choice to buy more books.