Ten years ago Carcanet published Eavan Boland's first Collected Poems, a book which confirmed her place at the forefront of modern Irish poetry. The New Collected Poems brings the record of her achievement up to date, adding The Lost Land (1998) and Code (2001). It also fills out the early record, reproducing two key poems from 23 Poems (1962), New Territory (1967), The War Horse (1975) and her later books; it includes passages from her unpublished 1971 play Femininity and Freedom. Following the chronology of publication, the reader experiences the exhilarating sense of development, now incremental, now momentous. Her writing and example are vitally enabling for young writers and readers; she traces a measured process of emancipation from conventions and stereotypes, writing now in a space she has cleared not by violent rejection, but by dialogue, critical engagement and patient experimentation with form, theme and language 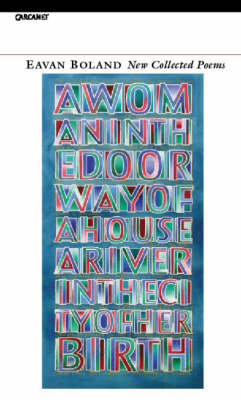 Born in Dublin in 1944, Eavan Boland studied in Ireland, London and New York. Her first book was published in 1967. She is Melvin and Bill Lane Professor in the Humanities at Stanford University, California. Carcanet published her prose book Object Lessons (Poetry Book Society Special Commendation) in 1995.

View All Books By Eavan Boland