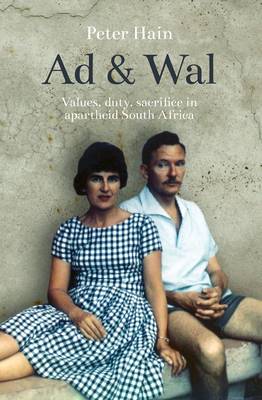 What would you do if you lived under the ugliest of regimes, a byword for repression and injustice? What would you do if you knew that you could stay safe only if you stayed quiet? Most of us like to think we'd stand up to fight against evil, and yet the vast majority of white South Africans either stood by and said nothing or actively participated in the oppression and carnage during apartheid. Ad & Wal is the story of two modest people who became notorious, two survivors who did what they thought was right, two parents who rebelled against the apartheid regime knowing they were putting themselves and their family in grave danger. Ad & Wal is the story of an ordinary couple who did extraordinary things despite the odds. How did they come to their decision? What exactly did they do? What can we learn from them? Peter Hain, MP and former Cabinet minister, tells the story of his parents - campaigners, fighters, exiles - in this searing and inspiring account.

Peter Hain is the Labour MP for Neath. He served as Leader of the House of Commons and as Secretary of State for Northern Ireland, for Work and Pensions, and for Wales in the governments of Tony Blair and Gordon Brown. He is also the author of a memoir, Outside In, and a biography, Mandela.

More About Peter Hain
Add To Wishlist
Buy from our bookstore and 25% of the cover price will be given to a school of your choice to buy more books.