Six Days of the Condor

Six Days of the Condor Synopsis

'From the bottom of the stairwell Malcolm could only see that the room appeared to be empty. Mrs Russell wasn't at her desk. Out of the corner of his eye he noticed that Dr. Lappe's door was partially open. There was a peculiar odour in the room . Malcolm tossed the sandwich bags on top of Walter's desk and slowly mounted the stairs. 'He found the sources of the odour. As usual, Mrs Russell had been standing behind her desk when they entered. The blast from the machine gun in the mailman's pouch had knocked her almost as far back as the coffee-pot. Her cigarette had dropped on her neck, singeing her flesh until the last millimetre of tobacco and paper had oxidized. A strange dullness came over Malcolm as he stared at the huddled flesh in the pool of blood. An automaton, he slowly turned and walked into Dr Lappe's office.' When Malcolm discovers his CIA colleagues butchered in the blood-spattered office he realises that only an oversight by the assassins has saved his life. He contacts CIA headquarters for help but when an attempted rendezvous goes badly wrong he realises that no-one can be trusted. Code-named Condor, Malcolm disappears into the streets of Washington, hoping to evade the killers long enough to unravel the conspiracy - but will that be enough to save his life? First published in 1974, Six Days of the Condor became an instant classic conspiracy theory thriller. This brand new edition includes an new introduction by James Grady giving details of the circumstances that led to him originally writing the book, what happened subsequently and how he was approached by Hollywood a few years ago to help with a remake - a remake that never happened. Also included for the first time in print along with the original is the 50 page treatment that Grady produced for that missing movie - a treatment that Grady refers to as a reimagining, entitled condor.net 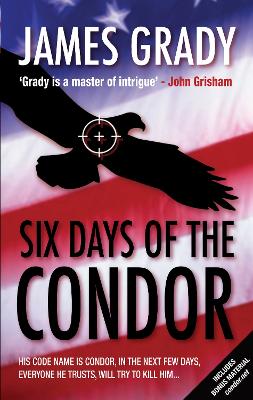 James Grady has published more than a dozen novels and three times that many short stories, and worked in both feature films and television. His first novel, Six Days of the Condor, became the classic Robert Redford movie Three Days Of The Condor and the current Max Irons TV series Condor. Grady has been both US Senate aide and a national investigative reporter. He has received Italy's Raymond Chandler Medal, France's Grand Prix Du Roman Noir and Japan's Baka-Misu literature award, two Regardie Magazine short story awards, and been a Mystery Writers of America Edgar finalist. In 2008, Grady was named ...