Booktrack Edition adds an immersive musical soundtrack to your audiobook listening experience!* 'One of the greatest novels of the Second World War' The Times. 'A remarkable find' Antony Beevor. 'A masterpiece' Mail on Sunday. Stalingrad, November 1942. Lieutenant Breuer dreams of returning home for Christmas. But he and his fellow German soldiers will spend winter in a frozen hell - as snow, ice and relentless Soviet assaults reduce the once-mighty Sixth Army to a diseased and starving rabble. Breakout at Stalingrad is a stark and terrifying portrait of the horrors of war, and a profoundly humane depiction of comradeship in adversity. The book itself has an extraordinary story behind it. Its author fought at Stalingrad and was imprisoned by the Soviets. In captivity, he wrote a novel based on his experiences, which the Soviets confiscated before releasing him. Gerlach resorted to hypnosis to remember his narrative, and in 1957 it was published as The Forsaken Army. Fifty-five years later Carsten Gansel, an academic, came across the original manuscript of Gerlach's novel in a Moscow archive. This first translation into English of Breakout at Stalingrad includes the story of Gansel's sensational discovery. *Booktrack is an immersive listening experience that pairs traditional audiobook narration to complementary music and sound effects. The tempo and rhythm of the score are in perfect harmony with the action and characters throughout the audiobook. Gently playing in the background, the music never overpowers or distracts from the narration, so listeners can enjoy every minute. When you purchase this Booktrack edition, you receive the exact narration as the traditional audiobook available, with the addition of music throughout.

'Anyone who wants an idea of what Stalingrad was really like should read this book ... Gerlach records the lives and feelings of soldiers of all ranks' Frankfurter Allgemeine Zeitung. '[Written with] raw, vivid immediacy, which piles up compelling images and episodes ... It is an exceptional, powerful and moving work' Sunday Times. 'This excellent book will shine a light on the horrors of the Eastern Front for a new generation of English-speaking readers ... An absolute gem of a book' Soldier magazine. '[It] is so deftly handled and well constructed ... It is astonishing that [this] is Gerlach's first attempt at fiction' The Sunday Times. 'A remarkable find' Antony Beevor. 'Gerlach's truly magnificent novel [...] is a devastating account of the appalling privations suffered by the German army, left to their fate by the foundering, over-stretched Fatherland. A masterpiece' Mail on Sunday. 'One of the greatest novels of the Second World War' The Times.

Heinrich Gerlach served as a lieutenant in the 14th Panzer Division at Stalingrad. Wounded and then captured by the Soviets, he wrote Breakout at Stalingrad while being held in captivity in the USSR. He died in 1991. 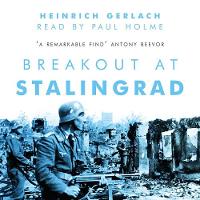 View All Books By Heinrich Gerlach