Part of the On Screen Series

* Written by an experienced film author with many books to her credit* The only book in print to examine Audrey's films in detail* Audrey remains an icon - both as a film star of considerable talent and also for her influence on fashion in the 1950s and 1960sAudrey Hepburn - on screen will trace Audrey's career from her early life in occupied Belgium, through her earliest screen glimpses in such classic British movies as The Lavender Hill Mob and Laughter in Paradise in the late 40s/early 50s, the enduring classics such as Roman Holiday, Sabrina Fair, The Nun's Story, Breakfast at Tiffany's and My Fair Lady from the 50s and 60s. Before moving on to the later, less well known films: Robin and Marian, Bloodline, They All Laughed and Love Among Thieves. In total, she made only twenty-six movies, not many considering her film career spanned 44 years. Of those twenty-six films, Audrey was the star of only nineteen but yet they include some of the greatest films of all time, and provide a record of a young girl, who grew from a Princess, in William Wyler's 1953 Roman Holiday, to an Angel in Steven Spielberg's 1989 Always. But she wasn't just an angel on screen - in the last years of her life she fulfilled that role off-screen as well, when she became a Goodwill Ambassador for UNICEF. Audrey Hepburn - on screen will provide an overview of this enduring icon of the silver screen

Ellen Cheshire has written books on Bio-pics (Wallflower Press), Ang Lee and Jane campion (Supernova Books) and The Coen Brothers (Pocket Essentials). She has contributed chapters to Taschen's Archives books on James Bond and Charlie Chaplin, women cinematographers in silent film and UK counterculture films for Supernova Books, Nazi Propaganda cinema for Ian Allen Publishing and film/cinema in Shoreham and Worthing for The History Press. She has taught film at undergraduate and A Level, and was on the writing team for Illuminate Publishing's recent A level Film Text Book. She lives in Bognor Regis 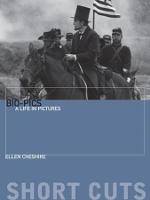 View All Books By Ellen Cheshire