' Is there anyone there? he tentatively enquired at the shadows. There was no response. Must have been a cat he thought. His pulse calmed and he wiped the sweat from his brow. The young thief turned away from the alley and the road and once more urged his feet to move on. What are you doing little boy? commanded a booming voice from the alleyway. Sidney Rain is an ordinary man with an ordinary job in an ordinary town. Except for the fact that sometimes at night he dresses up as a superhero and heads out living his fantasy. But he's putting on weight, about to lose his job and he's generally not feeling particularly super at all. Stanley Rain is Sidney's 12 year old son. He's an ordinary boy with ordinary friends at an ordinary school. But that school is being taken over by a local entrepreneur and is changing for the worst. And Stanley is not going to let that happen without a fight. When a mysterious theft takes place, Stanley and his friends will need to turn detective to help save their school. And after being fired at work by his new boss, Sidney will need his friends to help save his soul.

Andy Donaldson is a Secondary school teacher, who, tired of telling stories to children in his classroom for over twenty years, finally decided to write a book of his own. Rain Town is his debut children's book. He lives in Warwickshire. 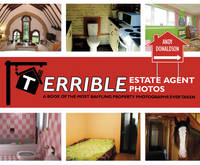 View All Books By Andy Donaldson