Part of the Blackness in Britain Series

Back to Black Synopsis

'Lucid, fluent and compelling' - Observer 'We need writers like Andrews ... These are truths we need to be hearing' - New Statesman Back to Black traces the long and eminent history of Black radical politics. Born out of resistance to slavery and colonialism, its rich past encompasses figures such as Marcus Garvey, Angela Davis, the Black Panthers and the Black Lives Matter activists of today. At its core it argues that racism is inexorably embedded in the fabric of society, and that it can never be overcome unless by enacting change outside of this suffocating system. Yet this Black radicalism has been diluted and moderated over time; wilfully misrepresented and caricatured by others; divested of its legacy, potency, and force. Kehinde Andrews explores the true roots of this tradition and connects the dots to today's struggles by showing what a renewed politics of Black radicalism might look like in the 21st century.

Back to Black Press Reviews

'Lucid, fluent and compelling. Andrews takes the reader on a rapid-fire tour of black intellectual thought.' Observer 'Redefines the Black radicalism which came to prominence through the work of Malcom. We need writers like Kehinde Andrews.' New Statesman 'A fiery, in-depth investigation of black radicalism and a call for a more revolutionary, liberated society across the globe.' Foreword Reviews 'Black radicalism, Kehinde Andrews argues, is the most misunderstood ideology of the 20th century. And he's right ... He takes the reader on a rapid-fire tour of black intellectual traditions, dismissing them on the basis of their flaws with apparent ease. It's a compelling polemic ... You might not agree with Andrews, but we need him.' Observer 'Back to Black redefines the Black radicalism which came to prominence through the work of Malcom X during the civil rights movement against a whole host of ideologies with which is it constantly confused. Black radicalism is not, he tells us, simply a tradition : we need to understand it as its own political ideology , and a blueprint for major change ... For debates about global inequality and injustice to progress, we need writers like Kehinde Andrews.' New Statesman 'And of what is attainable: survival or liberation? Andrews's book inspires such reflection, and what is to be gained from Back to Black is the inferred possibility and perceived hopefulness of the existence of an anti-oppressive society.' LSE Review of Books 'This book shows that the liberal road to reform was a dead end; it is time to commit to revolution.' Black Agenda Report 'Back to Black by Kehinde Andrews has made me reassess my view of reparations for slavery. I actually felt the shift happening.' Emily Maitlis, BBC journalist and presenter 'Andrews is ferocious and brilliant and absolutely indispensable.' Junot Diaz 'Andrews takes the concepts that underpin so much of our woolly, contemporary talk about blackness, structural racism, pan-Africanism and - most of all - radicalism, and does the hard, essential work of re-inserting meaning and critique into the debate. An unflinching and authentic contribution.' Afua Hirsch, author of Brit(ish): On Race, Identity and Belonging 'No more timid, liberal bullsh*t or empty jingoism. Kehinde Andrews is a brilliant, black British intellectual who searingly and expertly reveals the meaning of real change, for those willing to face it. In a time of flux, doubt and uncertainty, Kehinde provides a clear and lucid voice. Back to Black is an important book for anyone interested in real change and what that is likely to cost.' Russell Brand 'Andrews pulls no punches. His concept of black radicalism is raw and powerful. This book is sure to provoke, and will gain him adversaries - both black and white - because of the home truths it exposes.' Femi Nylander, Rhodes Must Fall 'A timely and important book capturing an important political moment in north Atlantic culture.' Robert Beckford, BAFTA winning documentary filmmaker, and Professor of Theology, Canterbury Christ Church University

Author and educator Kehinde Andrews is one of the leading Black political voices in Britain. He is associate professor in sociology at Birmingham City University, a regular writer of opinion pieces for the Guardian, Independent and Ebony magazine, and editor of the series 'Blackness in Britain'. He was part of the team that launched the first Black Studies degree in Europe, and is Co-chair of the Black Studies Association and of the Harambee Organisation of Black Unity. He regularly appears on television and radio. 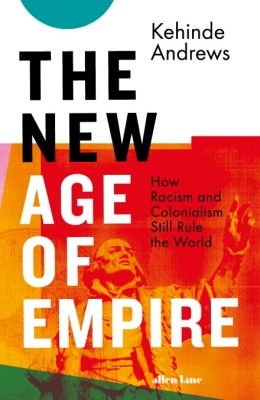