Morning Glory on the Vine

Morning Glory on the Vine Synopsis

'Glorious' Guardian 'Revelatory' New Yorker 'Evocative' Los Angeles Times In 1971, as her groundbreaking album Blue emerged as a singular commercial and critical success around the world, Joni Mitchell puzzled over what gift to give her friends that Christmas. The result was a handmade book, with only one hundred copies produced, filled with Joni's hand-written lyrics and reproductions of many of her stunning drawings - portraits, abstracts, random concertgoers, and more. Each was given to a friend and, until now, the edition has remained private. Today, with Morning Glory on the Vine, Joni's long-ago personal Christmas present is a present to us all.

Glorious * * Guardian * * I became engrossed in Mitchell's drawings while browsing the book - they're vivid, intimate - but her handwritten lyrics and poems are just as revelatory . . . Morning Glory on the Vine feels like an extension of Mitchell's already considerable reach - it's a way of better understanding what she found beautiful, and worth holding onto. It is also a reassuring, almost palliative object on its own: these drawings and writings, arranged so artfully and carefully, feel like an anchor in an increasingly unsteady world * * New Yorker * * The peerless Joni Mitchell isn't only one of the 20th century's greatest songwriters, she's also a water colourist of some distinction . . . It contains a rare intimacy and candour, as well as a unique gateway into Mitchell's inimitable music itself * * Metro, Books of the Year * * A collection of more than thirty original paintings steeped in a bygone era . . . Evocative . . . A revelation for her devoted listeners, Morning Glory on the Vine is a comforting and intimate look at what caught an artist's eye when she was at the peak of her chaparral mountain * * Los Angeles Times * * A showcase for another side of Joni Mitchell's prodigious talent * * Washington Post * * A warm, water-coloured invitation to Mitchell's Laurel Canyon years . . . Think of the book as an artful expression of friendship, a personal time capsule unearthed * * The Globe and Mail * *

Joni Mitchell is a Canadian singer-songwriter whose songs have helped define an era and a generation. She has received many accolades, including nine Grammy Awards, and has released 19 studio albums, including Blue in 1971. Mitchell, with roots in visual art, has designed most of her own album covers. Among her numerous honours, she was awarded a Grammy Lifetime Achievement Award in 2002 and was inducted into the Canadian Songwriters Hall of Fame in 2007. 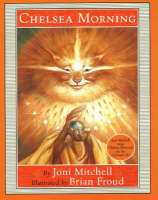 View All Books By Joni Mitchell