The Art of Dying

The Art of Dying Synopsis

There's a fine line between kill and cure. Edinburgh, 1849. Despite Edinburgh being at the forefront of modern medicine, hordes of patients are dying all across the city, with doctors finding their remedies powerless. But it is not just the deaths that dismay the esteemed Dr James Simpson. A whispering campaign seeks to blame him for the death of a patient in suspicious circumstances. Simpson's protege Will Raven and former housemaid Sarah Fisher are determined to clear their patron's name. But with Raven battling against the dark side of his own nature, and Sarah endeavouring to expand her own medical knowledge beyond what society deems acceptable for a woman, the pair struggle to understand the cause of the deaths. Will and Sarah must unite and plunge into Edinburgh's deadliest streets to clear Simpson's name. But soon they discover that the true cause of these deaths has evaded suspicion purely because it is so unthinkable.

The Art of Dying Press Reviews

PRAISE FOR THE WAY OF ALL FLESH: Parry's Victorian Edinburgh comes vividly alive - and it's a world of pain -- VAL McDERMID Some gore (historical gore doesn't count) but mostly nice historical detail (reminding you that doctors never do know everything) with a little overlay of romantic tension and a side of old-fashioned feminism. Compelling * * Financial Times * * Intriguing * * i * * Offers more of the alluring combination of crime fiction and historical fact seen in last year's The Way of All Flesh . . . The reader may need a tiny dose of chloroform to relax after all of these thrills. . . For any reader in need of a swift-acting tonic, I prescribe picking up this thriller as soon as possible * * Scotland on Sunday * * A menacing tale of murder amid the medical experiments of mid-19th century Edinburgh * * iNews * * The central characters and their relationship are the book's strengths . . . worth a read - the characters and setting are wonderful * * The Times * * Dark and visceral, gritty and charming, with a twisting plot and compelling characters - not least, Victorian Edinburgh at her deadliest. The immersive world of Ambrose Parry just gets better and better -- JESS KIDD A gripping Victorian thriller * * Sunday Express * * Full of twists and turns - a great read * * Evening Times * * Gleeful, romping . . . The fog and stench of Edinburgh's Old Town definitely jump off the page . . . The central relationship between loveable rogue Raven and proto-feminist Fisher is the beating heart of The Art of Dying. Both characters are drawn with real empathy and nuance, and their complicated feelings for each other drive the book as much as the smart storylines. A great piece of storytelling * * Big Issue * *

Ambrose Parry is a pseudonym for a collaboration between Chris Brookmyre and Marisa Haetzman. The couple are married and live in Scotland. Chris Brookmyre is the international bestselling and multi-award-winning author of over twenty novels. Dr Marisa Haetzman is a consultant anaesthetist of twenty years' experience, whose research for her Master's degree in the History of Medicine uncovered the material upon which this series, which began with The Way of All Flesh, is based. The Way of all Flesh was shortlisted for the McIlvanney Prize for Scottish Crime Book of the Year and longlisted for the Theakston Old Peculier Crime ... 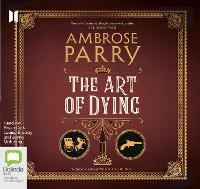 View All Books By Ambrose Parry