Travellers in the Third Reich

Travellers in the Third Reich Synopsis

THE SUNDAY TIMES TOP THREE BESTSELLER; Winner of the Los Angeles Times Book Prize for History 2018; One of the Daily Telegraph's Best Books of 2017; A Guardian 'Readers' Choice' Best Book of 2017; Without the benefit of hindsight, how do you interpret what's right in front of your eyes?; The events that took place in Germany between 1919 and 1945 were dramatic and terrible but there were also moments of confusion, of doubt - of hope. How easy was it to know what was actually going on, to grasp the essence of National Socialism, to remain untouched by the propaganda or predict the Holocaust?; Travellers in the Third Reich is an extraordinary history of the rise of the Nazis based on fascinating first-hand accounts, drawing together a multitude of voices and stories, including students, politicians, musicians, diplomats, schoolchildren, communists, scholars, athletes, poets, journalists, fascists, artists, tourists, even celebrities like Charles Lindbergh and Samuel Beckett. Their experiences create a remarkable three-dimensional picture of Germany under Hitler - one so palpable that the reader will feel, hear, even breathe the atmosphere.; These are the accidental eyewitnesses to history. Disturbing, absurd, moving, and ranging from the deeply trivial to the deeply tragic, their tales give a fresh insight into the complexities of the Third Reich, its paradoxes and its ultimate destruction.

A compelling historical narrative ... both flatters and challenges our hindsight. [Boyd] lets her voices, skilfully orchestrated, speak for themselves, which they do with great eloquence - The Daily Telegraph; Fascinating ... surreal scenes pepper Boyd's deep trawl of travellers' tales from the scores of visitors who were drawn to the `new Germany' in the 1930s - The Spectator; Contains many amazing anecdotes ... It warns us that we, with our all-seeing hindsight, might ourselves have been fooled or beguiled or inclined to make excuses, had we been there at the time. I can thoroughly recommend it as a contribution to knowledge and an absorbing and stimulating book in itself - Peter Hitchens, Mail on Sunday; 'Meticulously researched ... Julia Boyd's research has been exhaustive. She has visited archives all over the world and assembled a vast and entertaining cast of travellers ... makes for thought-provoking reading - Caroline Moorehead, Literary Review; A fascinating book -- Robert Elms, BBC Radio London; To a younger generation it seems incomprehensible that after the tragic Great War people and political leaders allowed themselves to march into the abyss again. Julia Boyd's book, drawing on wide experience and forensic research, seeks to answer some of these questions. -- Randolph Churchill; With an almost novelistic touch, [Boyd] presents a range of stories of human interest ... The uncomfortable moral of Travellers in the Third Reich is that people see and hear only what they already want to see and hear -- David Pryce-Jones, Standpoint ; Fascinating ... This absorbing and beautifully organised book is full of small encounters that jolt the reader into a historical past that seems still very near - Lucy Lethbridge, The Tablet; In the 1930s the most cultured and technologically advanced country in Europe tumbled into the abyss. In this deeply researched book Julia Boyd lets us view Germany's astonishing fall through foreign eyes. Her vivid tapestry of human stories is a delightful, often moving read. It also offers sobering lessons for our own day when strong leaders are again all the rage -- Professor David Reynolds, author of The Long Shadow: The Great War and the 20th Century; Drawing on the unpublished experiences of outsiders inside the Third Reich, Julia Boyd provides dazzling new perspectives on the Germany that Hitler built. Her book is a tour de force of historical research - Dr Piers Brendon, author of The Dark Valley: A Panorama of the 1930s; What was Nazi Germany really like in the run up to the Second World War? Julia Boyd's painstakingly researched and deeply nuanced book shows how this troubled country appeared to travellers of the 1930s who did not have the benefit of hindsight. A truly fascinating read -- Keith Lowe, Sunday Times bestselling author of Savage Continent and Inferno; Engrossing ... skilfully woven together to create a three-dimensional picture of Germany under Hitler that has many resonances for today --Caroline Sanderson, The Bookseller; A revealing and original account. Some of Adolf Hitler's fellow travellers, lulled by self-deception, gulled by propaganda, deluded themselves about Nazi Germany as they deceived others - Sir John Tusa ; Julia Boyd has conducted a vast range and volume of research. The numerous witnesses of Germany under Hitler whom she quotes have different ages, nationalities, backgrounds and opinions. Out of the multitude of first-hand accounts she spins a tapestry which is full of vivid detail and gradually creates a coherent whole. The horrors of the Hitler regime and how it came to power, and the suffering of ordinary people, are brought to life. The book is comprehensive, informative and full of life. I wish I could have read it before I first worked in post-war Germany. I would have understood better the Germans whom I knew and admired even more what West Germans achieved after 1945. A glorious read for anyone with an interest in the history of the twentieth century - Sir Christopher Mallaby, former ambassador to Germany and France; Unique, original and engagingly written. This account of visitors and tourists to Germany brings to life these difficult decades in a most refreshing way [and] should attract a wide circle of readers - Dr Zare Steiner, author of The Lights that Failed: European International History 1919-1933 and Triumph of the Dark: 1933-1939; An entertaining popular history ... a fascinating book. Boyd lets the voices from the past speak to us ... opinions that are sometimes shocking and often thought provoking. Traveller attitudes give an insight into the feelings before the war, often at odds with or in more depth than many standard histories ... very readable - Paul Burke, nudge-book.com

Julia Boyd is the author of Travellers in the Third Reich: The Rise of Fascism through the Eyes of Everyday People, the Sunday Times top three bestseller and winner of the Los Angeles Times Book Prize for History 2018. Her previous books include A Dance with the Dragon: The Vanished World of Peking's Foreign Colony, The Excellent Doctor Blackwell: The Life of the First Woman Physician and Hannah Riddell: An Englishwoman in Japan. An experienced researcher, she has scoured archives all over the world to find original material for her books. As the wife of a former diplomat, she lived in ... 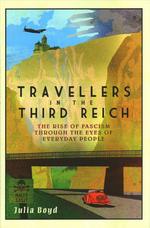 View All Books By Julia Boyd