In Sex, Lies and Question Time, former MP Kate Ellis looks at what it is really like to be a woman in Australian politics today. In 2017, a survey showed zero per cent of young Australian women would consider entering politics. Zero. In a time when we critically need women in our parliament, and in a country that was an early leader in women's political participation, there is a perception that women and politics don't mix. Shocking incidents have exposed the sexism that women in politics face from opposition, the media, the public, even their own colleagues. And those headlines only tell half the story. In Sex, Lies and Question Time, Kate Ellis tells the sometimes enraging, often funny and incredibly honest full story of women in Australian politics today. As well as sharing the experiences of her own fifteen years in parliament, Kate has spoken to politicians from across Australia's political spectrum, including former Prime Minister Julia Gillard, Julia Bishop, Penny Wong, Linda Burney, Sarah Hanson Young and Pauline Hanson. Kate explores issues like sexism, bullying, motherhood, appearances, social media, racism, the sisterhood and, of course, sex. But she also celebrates everything Australian female politicians have achieved. Because most of all this book is a powerful call for Australian women to inspire to political leadership, to shape a fairer Australia - where 'women's issues' are everyone's issues. 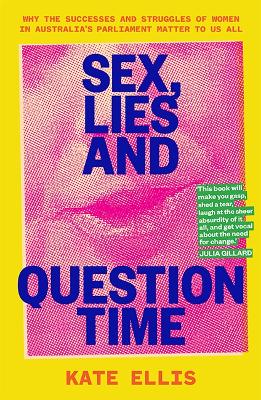 Kate Ellis represented Adelaide in the Australian House of Representatives for Labor from 2004 until 2019. She served in multiple portfolios in the outer ministry of the 2007-13 federal Labor government and was in shadow Cabinet until she left parliament at the 2019 federal election. She is a passionate supporter of the Adelaide Crows and the mother of two young boys.