Super women. Who are some of the most awesome women in history?----------&quoteThe Book of Awesome Women shares stories and triumphs that are not often mentioned in mainstream history and is something you absolutely need to check out....Reading this book filled me with happiness and I just felt so amazed by what the women within this book have accomplished.&quoteThe Book of Awesome Women Book Review from @kleffnotes, TheNerdyGirlExpress, December 11, 2017Sheroes: Women hold up half the sky and, most days, do even more of the heavy lifting including childbearing and child-rearing. All after a long day at the office. Women have always been strong, true heroes ? sheroes, oftentimes unacknowledged. As we shake off the last traces of a major patriarchal hangover, women are coming into their own. In the 21st Century, all women can fully embrace their fiery fempower and celebrate their no-holds-barred individuality. It is time to acknowledge the successful women of the world. Super women as female role models: From the foremothers who blazed trails and broke barriers, to today's women warriors from sports, science, cyberspace, city hall, the lecture hall, and the silver screen, The Book of Awesome Women paints 200 portraits of powerful and inspiring role models for women and girls poised to become super women of the future. Successful women: Some of the super women you will meet in The Book of Awesome Women: Dian Fossey Martina Navratilova Sojourner Truth Indira Ghandi Aretha Franklin Margaret Mead Coretta Scott King Georgia O'Keeffe Jackie Joyner-Kersee Joan Baez Eleanor Roosevelt Coco Chanel Anita Hill Nobel Peace Prize winner, Wangari Maathai and many moreNow is the time to acknowledge the greatness of women! 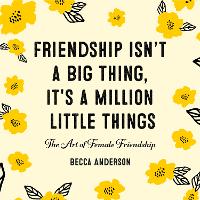 View All Books By Becca Anderson