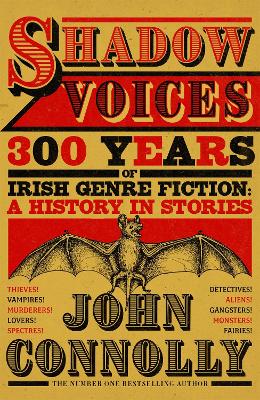 All hardbacks in the first print run will be signed by the author. The story of genre fiction - horror, romantic fiction, science fiction, crime writing, and more - is also the story of Irish fiction. Irish writers have given the world Lemuel Gulliver, Dracula, and the world of Narnia. They have produced pioneering tales of detection, terrifying ghost stories and ground-breaking women's popular fiction. Now, for the first time, John Connolly's one volume presents the history of Irish genre writing and uses it to explore how we think about fiction itself. Deeply researched, and passionately argued, SHADOW VOICES takes the lives of more than sixty writers - by turns tragic, amusing, and adventurous, but always extraordinary - and sets them alongside the stories they have written, to create a new way of looking at genre and literature, both Irish and beyond. Here are vampires and monsters, murderers and cannibals. Here are female criminal masterminds and dogged detectives, star-crossed lovers and vengeful spouses. Here are the SHADOW VOICES.

John Connolly is author of the Charlie Parker mysteries, The Book of Lost Things, the Samuel Johnson novels for young adults and, with his partner, Jennifer Ridyard, co-author of the Chronicles of the Invaders. John Connolly's debut - EVERY DEAD THING - introduced the character of Private Investigator Charlie Parker, and swiftly launched him right into the front rank of thriller writers. All his subsequent novels have been Sunday Times bestsellers. He was the winner of the 2016 CWA Short Story Dagger for On the Anatomization of an Unknown Man (1637) by Frans Mier from NIGHT MUSIC: Nocturnes Vol 2. In 2007 he was awarded the Irish Post Award for Literature. He was the first non-American writer to win the US Shamus award and the first Irish writer to win an Edgar award. BOOKS TO DIE FOR, which he edited with Declan Burke, was the winner of the 2013 Anthony, Agatha and Macavity awards for Best Non-Fiction work.

More About John Connolly
Add To Wishlist
Buy from our bookstore and 25% of the cover price will be given to a school of your choice to buy more books.