A Registry of My Passage Upon the Earth

A Registry of My Passage Upon the Earth Synopsis

From the bestselling, award-winning author of The Winter Soldier and The Piano Tuner comes a collection of interlacing tales of men and women as they face the mysteries and magic of the world. On a fated flight, a balloonist makes a discovery that changes her life forever. A telegraph operator finds an unexpected companion in the middle of the Amazon. A doctor is beset by seizures, in which he is possessed by a second, perhaps better, version of himself. And in Regency London, a bare-knuckle fighter prepares to face his most fearsome opponent, while a young mother seeks a miraculous cure for her ailing son. At times funny and irreverent, always moving, these stories cap a fifteen-year project that has won both a National Magazine Award and Pushcart Prize. From the Nile's depths to the highest reaches of the atmosphere, from volcano-wracked islands to an asylum on the outskirts of Rio de Janeiro, these are lives of ecstasy and epiphany.

A Registry of My Passage Upon the Earth Press Reviews

Nine tales of human endurance, accomplishment, and epiphany told with style and brio. Mason is one of our best historical novelists, creating panoramas of rich detail, propulsive plot, and artful character development in novels such as The Piano Tuner and The Winter Soldier. In his first story collection, he shows how quickly and completely he can immerse readers in a foreign place and time . . . An enchanting cabinet of curiosities and wonders * Kirkus * One of the finest prose stylists in American fiction * New York Times *

Daniel Mason is a physician and author of the novels The Piano Tuner and The Winter Soldier. His work has been translated into twenty-eight languages, and adapted for opera and theatre. A recipient of a fellowship from the National Endowment for the Arts, he is currently a Clinical Assistant Professor of Psychiatry at Stanford University, where he teaches courses in the humanities and medicine. He lives in the Bay Area with his family. 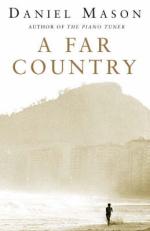 View All Books By Daniel Mason