The Restaurant at the End of the Universe

The Restaurant at the End of the Universe Synopsis

Following the smash-hit sci-fi comedy The Hitchhiker's Guide to the Galaxy, The Restaurant at the End of the Universe is the second part in Douglas Adams' multi-media phenomenon and cult classic series. This edition includes exclusive bonus material from the Douglas Adams archives, and an introduction by Monty Python star, Terry Jones. If you've done six impossible things this morning, why not round it off with breakfast at Milliways, the Restaurant at the end of the Universe? Which is exactly what Arthur Dent and the crew of the Heart of Gold plan to do. There's just the small matter of escaping the Vogons, avoiding being taken to the most totally evil world in the Galaxy and teaching a space ship how to make a proper cup of tea. And did anyone actually make a reservation? Follow Arthur Dent's galactic (mis)adventures in the rest of the trilogy with five parts: Life, the Universe and Everything, So Long, and Thanks for All the Fish, and Mostly Harmless.

The Restaurant at the End of the Universe Press Reviews

Sheer delight * The Times * Magical . . . read this book * Sunday Express * One of the world's sanest, smartest, kindest, funniest voices * Independent on Sunday * Very occasionally a book comes along that changes the way you laugh and what you laugh about -- Richard Dawkins Quite good I suppose, if you like brilliantly entertaining books written with a touch of imaginative genius -- Griff Rhys Jones There has never been another writer remotely like Douglas Adams. He discovered a completely new genre - scientific wit - and having discovered it he raised it to dizzying heights -- Tony Robinson He had almost a Wodehousian style and some of his phrases and jokes entered our language. He changed the way people spoke -- Stephen Fry Hitchhiker's is packed with that unique energy, all barmy and bristling and bold. This book can be witty, iconoclastic, godless, savage, sweet, surreal, but above all, it dares to be silly. Fiercely, beautifully silly -- Russell T. Davies, writer and producer of Doctor Who It changed my whole life. It's literally out of this world -- Tom Baker I haven't known many geniuses in my life. Some brilliantly smart people, but only a tiny handful would I class as geniuses. I would class Douglas, because he saw things differently, and he was capable of communicating the way he saw things, and once he explained things the way he saw them, it was almost impossible to see them the way you used to see them -- Neil Gaiman Fizzing with ideas . . . Brilliant -- Charlie Brooker Dazzlingly inventive -- Caitlin Moran One of the greatest achievements in comedy. A work of staggering genius -- David Walliams 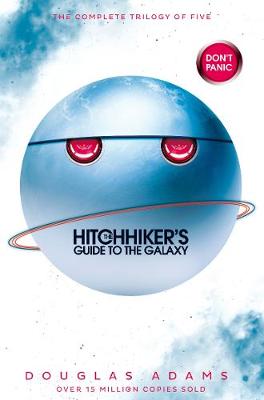 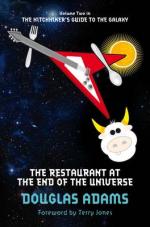