Roman Quests: The Archers of Isca

Part of the The Roman Quests Series

The second thrilling adventure in a new historical series from million-copy-selling Caroline Lawrence, set in Roman Britain during the reign of the evil Emperor Domitian. Britannia AD 94. On the run from the Emperor Domitian, fifteen-year-old Fronto has joined the Roman army in order to find the security and structure he craves. But when his younger sister Ursula is captured by a terrifying Druid called Snakebeard, he must make an impossible decision. Can he leave the army, when desertion is punishable by death? His desire: To become a good soldier His quest: To rescue his sister His destiny: To find his place in Roman Britain From the bestselling author of THE ROMAN MYSTERIES, perfect for children studying at Key Stage 2. Historical locations featured in this book are a British Iron Age Village, Bath Spa and the fortress at Caerleon.

a gripping tale -- Elizabeth Hawksley * The Historical Novel Society Review * As with all Caroline's books, this story educates as it entertains. I have learned more about life in Roman Britain through these books than I ever did from more historical texts * Bookwitch * Instantly accessible adventure ... trans-century appeal * THE GUARDIAN on ROMAN MYSTERIES * An interesting and exciting read that is extremely well researched. It is packed with accurate detail of everyday Roman life. The story is so well paced and involving that you don't realise just how much information you are absorbing. * SCHOOL LIBRARIAN on ROMAN MYSTERIES * Immensely readable * TIMES EDUCATIONAL SUPPLEMENT on ROMAN MYSTERIES * This is a very atmospheric, exciting story full of historical detail and surprises. -- Debbie * PRIMARY TIMES - HAMPSHIRE on ESCAPE FROM ROME * Full of thrills and excitement from the very first sentence. -- Linda Lawlor * THE BOOKBAG on ESCAPE FROM ROME * There is an excellent history lesson nestling among all the adventures the children encounter -- Ann Giles * THE BOOK WITCH on ESCAPE FROM ROME * This exciting adventure really captures the attention as well as being packed with authentic historical detail -- Sarah Brew * PARENTS IN TOUCH on ESCAPE FROM ROME * Promising to be just as thrilling and richly detailed as her Roman Mysteries. * THE BOOKSELLER *

Caroline Lawrence is American. She lives with her husband by the river in London and is active as a speaker in schools and at book festivals. She took part in the British Museum's POMPEII LIVE event, giving talks that were streamed to schools all over the UK, and she is the winner of the 2009 CLASSICS ASSOCIATION PRIZE for 'a significant contribution to the public understanding of Classics'. In addition to the 17 novels in the ROMAN MYSTERIES sequence, Caroline Lawrence has written five spin-off titles, all of which have contributed to total UK sales in excess of 1 million copies. Visit Caroline's ... 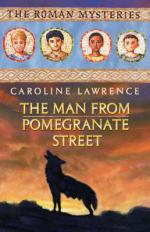 View All Books By Caroline Lawrence