A spellbinding novel combining Scottish folklore with hidden history, by the Sunday Times bestselling author Sally Magnusson. Loch Katrine waterworks, 1856. A Highland wilderness fast becoming an industrial wasteland. No place for a lady. Isabel Aird is aghast when her husband is appointed doctor to an extraordinary waterworks being built miles from the city. But Isabel, denied the motherhood role that is expected of her by a succession of miscarriages, finds unexpected consolations in a place where she can feel the presence of her unborn children and begin to work out what her life in Victorian society is for. The hills echo with the gunpowder blasts of hundreds of navvies tunnelling day and night to bring clean water to diseased Glasgow thirty miles away - digging so deep that there are those who worry they are disturbing the land of faery itself. Here, just inside the Highland line, the membrane between the modern world and the ancient unseen places is very thin. With new life quickening within her again, Isabel can only wait. But a darker presence has also emerged from the gunpowder smoke. And he is waiting too. Inspired by the mysterious death of the seventeenth-century minister Robert Kirke and set in a pivotal era two centuries later when engineering innovation flourished but women did not, The Ninth Child blends folklore with historical realism in a spellbinding narrative. *PRAISE FOR THE SEALWOMAN'S GIFT* 'I enjoyed and admired it in equal measure' Sarah Perry 'An extraordinarily immersive read' Guardian 'Richly imagined and energetically told' Sunday Times 'An epic journey in every sense: although it's historical, it's incredibly relevant to our world today' Zoe Ball Book Club

A really, really good read * BBC R2 Book Club * Richly imagined and energetically told . . . a powerful tale of loss and endurance * Sunday Times * An evocative, striking new novel * The Times * A remarkable feat of imagination . . . an extraordinarily immersive read that emphasises the power of stories, examining themes of motherhood, identity, exile and freedom * Guardian * PRAISE FOR THE SEALWOMAN'S GIFT - I enjoyed and admired it in equal measure * Sarah Perry *

Bestselling author, journalist and broadcaster Sally Magnusson has written several books for adults and children, most recently her Sunday Times bestseller Where Memories Go (2014) about her mother's dementia, and The Sealwoman's Gift (2018), her acclaimed debut novel. Sally has inherited a rich storytelling tradition from her Scottish and Icelandic forebears. The Sealwoman's Gift was a Radio 2 Book Club and ITV Zoe Ball Book Club selection, and was shortlisted for the Authors' Club Best First Novel Award, the Saltire Fiction Book of the Year, the Paul Torday Memorial Prize, the McKitterick Prize, the Waverton Good Read Award and the HWA Debut Fiction ... 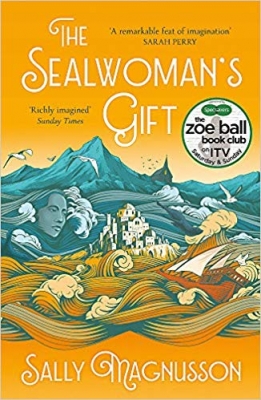