While Paris Slept: A mother in wartime Paris. A heartwrenching choice. A remarkable story.

While Paris Slept: A mother in wartime Paris. A heartwrenching choice. A remarkable story. Synopsis

On a platform in Paris before dawn, a woman whispers goodbye. It is the end. But also the beginning. In the tradition of Virginia Bailey's Early One Morning by Virginia Bailey and M. L. Stedman's The Light Between Oceans, a beautiful, powerful and unforgettable portrait of the brutality of war and the tenacity of love. 1953. Jean-Luc is a man on the run from his past. The scar on his face a small price to pay for surviving the horrors of Nazi occupation. Now, he has a new life in California, a family. He never expected the past to come knocking on his door. Paris 1944. A young Jewish woman's past is torn away in a heartbeat. Herded on to a train bound for Auschwitz, in an act of desperation she entrusts her most precious possession to a stranger. All she has left now is hope. On a darkened platform two destinies become entangled. Their choice will change the future in ways neither could have imagined. Beginning on an ordinary day and ending on an extraordinary one, WHILE PARIS SLEPT will move you and remind you of the remarkable wire of resilience threaded through the human soul.

Ruth Druart grew up on the Isle of Wight, moving away at the age of eighteen to study psychology at Leicester University. She has lived in Paris since 1993, where she has followed a career in teaching. She has recently taken a sabbatical, so that she can follow her dream of writing full-time. 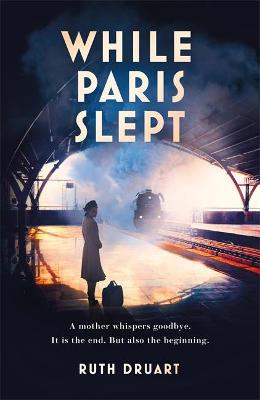 View All Books By Ruth Druart