The Twelve Lives of Samuel Hawley

Bursting with imaginative exuberance, THE TWELVE LIVES OF SAMUEL HAWLEY by Hannah Tinti has been described as 'One part Quentin Tarantino, and one part Scheherazade' (Ann Patchett) and will appeal to fans of The Sisters Brothers or The Watchmaker of Filigree Street. After years spent living on the run, Samuel Hawley moves with his teenage daughter Loo to Olympus, Massachusetts. There, in his late wife's hometown, Hawley finds work as a fisherman, while Loo struggles to fit in at school and grows curious about her mother's mysterious death. Haunting them both are twelve scars Hawley carries on his body, from twelve bullets in his criminal past - a past that eventually spills over into his daughter's present, until together they must face a reckoning yet to come. Both a coming of age novel and a literary thriller, THE TWELVE LIVES OF SAMUEL HAWLEY explores what it means to be a hero, and the price we pay to protect the people we love.

If you like to be challenged and you love writing that is subtly brilliant, and you enjoy a story that is unexpected, complex and unsettling, then you should put this coming-of-age tale on your to-read pile * NZ Womens Weekly * Tinti's second novel is a determinedly literary thriller about a father trying to shake off his criminal past and his daughter's need for answers about her mother's death * Weekend Herald * Pacy and violent, poignant and sensitive * Daily Mail, Best Reads for the Beach * The rapid-fire switching between the story lines gives the book an irresistible velocity that Ms. Tinti sustains to the end * Wall Street Journal Europe * This father-daughter story is an unusual but winning blend of small-town New England atmosphere and high-octane action scenes. Imagine a John Irving novel getting the Hollywood shoot-'em-up treatment and you'll have some idea of what Tinti does in this unexpectedly dark book full of quirky characters * The Bookbag * Their relationship is sharply drawn in this violent, tender tale * Woman & Home * It was the innovative storytelling and wonderful character of Loo, the schoolgirl on a mission to uncover the secret of her mother's mysterious death and decode the twelve scars that mark her ex-con father's body, that hooked me -- Sam Baker * The Pool * An inventive and fearless story about heroism and protecting the people we love * Culture Fly * Beautifully constructed... Tinti has fused a cowboy-noir action adventure and a coming-of-age tale into a father-daughter love story * Boston Globe * A master class in literary suspense * The Washington Post * Utterly magnificent - gripping, suspenseful, funny, and so full of heart -- Ruth Ozeki A father/daughter road trip you won't soon forget -- Richard Russo Hannah Tinti's second novel doesn't disappoint...Sensitive, coming-of-age literary novel meets Pulp Fiction and it all works? Yes, indeed! * Daily Mail * The Twelve Lives of Samuel Hawley is one part Quentin Tarantino, one part Scheherazade , and twelve parts wild innovation. Hannah Tinti proves herself to be an old fashioned storyteller of the highest order -- Ann Patchett What Hannah Tinti knows about fathers, daughters and time could, as they say, fill a book - and truly does. The Twelve Lives of Samuel Hawley is bold, exciting, and original -- Meg Wolitzer, author of THE INTERESTINGS Exceptional... a tender work of art exposing the universal needs of men to survive, to love, and grieve - whether their fate is cast in stars, or submerged beneath the surface... a sure-fire hit with characters I came to love. -- Essie Fox Starring a fiercely loving, reluctant criminal and a girl of grit and wonder, Tinti has forged a breathtaking novel of violence and tenderness * Booklist * [We are] carried by Tinti's seductive prose. She has a deep feeling for the passage of time and its effect on character. And when it's appropriate, she can use her vivid language to express the ripping depth of human pain. As this strikingly symphonic novel enters its last movement, the final bars remind us that all of the painful wounds that humans can endure, the worse are self-inflicted. * New York Times Book Review *

Hannah Tinti is the author of the short story collection ANIMAL CRACKERS and co-founder and editor in chief of One Story magazine. Her first novel, THE GOOD THIEF, was a New York Times Notable Book of the Year, and winner of the Centre for Fiction's First Novel Prize and a recipient of the American Library Association's Alex Award. 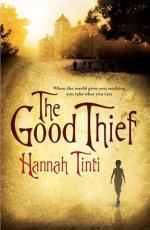