A moving tale of incredible friendship for fans of Jay Asher, THE FAULT IN OUR STARS and David Levithan. It's never been easy for Finley, particularly at home. But two things keep him going: his place on the basketball team and his girlfriend, Erin - the light in even the darkest of his days. Then Russ arrives. He answers only to Boy21, claims to be from outer space, and also has a past he wants to escape. He's one of the best high school basketball players in the country and threatens to steal Finley's starting position. Against all the odds, Russ and Finley become friends. Russ could change everything for Finley, both for better and for worse. But sometimes the person you least expect can give you the courage to face what's gone before ...and work out where you're going next. 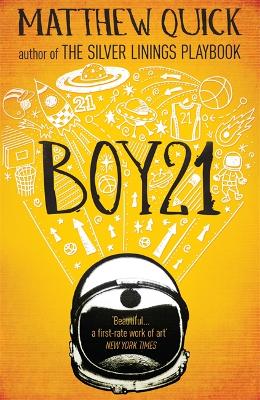 Matthew Quick (aka Q) is the New York Times bestselling author of several novels, including THE SILVER LININGS PLAYBOOK, which was made into an Oscar-winning film. His work has been translated into thirty languages and has received a PEN/Hemingway Award Honorable Mention. Q lives with his wife, novelist/pianist Alicia Bessette, on North Carolina's Outer Banks.

View All Books By Matthew Quick