The acclaimed first novel from the author of The Visible World Chang and Eng are twins. The cries that herald their entrance into the world are clear and piercing, but the loudest screams belong to the midwives. The two boys look perfect in every way - except for the skin joining them at the chest. For Chang and Eng are not only twins; they are also the first ever Siamese twins. Their journey through adulthood takes them from Asia to Europe and from there to America; they are granted audiences with kings, and paraded in salons and drawing rooms; later - starving and penniless - they trawl the doss-houses of London and, after a chance meeting with Phineas T. Barnum, join his travelling band of bearded ladies, albino beauties and German midgets. Eventually, they settle amid the plantations of North Carolina, where their hard-earned tranquillity is soon threatened by the looming spectre of the Civil War, its shadow signalling their final battle with fate.

'A first novel of great style, power and ambition' Time Out

Mark Slouka is a graduate of Columbia. His first collection of stories, Lost Lake, included the award-winning 'The Woodcarver's Tale'. He lives in New York with his wife and children. 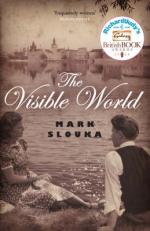 View All Books By Mark Slouka