American expat Scott Nolan has recently moved to Ireland and enjoys a flourishing career as a doctor, a rising media profile as a persuasive campaigner against drug abuse, and is very much in love with Laura, his beautiful new wife. But one wintry Dublin morning, Scott's life is changed forever when a team of contract killers attempts a daring double ambush. Their target: Ireland's antidrug government minister and his medical spokesman, Dr. Scott Nolan. The attack goes horribly wrong, and in the bloodbath that follows, Laura is killed by a bullet meant for Nolan. Fueled by grief and revenge, and desperate to claim back his life and find the killers, Scott enters into an uneasy alliance with his wife's brother, police detective Mark Higgins. Together they embark on a highly controversial international covert mission to slowly and systematically infiltrate the drug scene and track down the assassin. Using secret U.S. army interrogation compounds and breaking almost every law in the land, the duo finally close in on their target . . . . This nail biting, heart-pounding blockbuster weaves a tale from the back streets of Dublin to the red-light districts of Amsterdam and the seedy streets of Bangkok, accelerating to a breathtaking climax that will test Nolan's physical and moral fortitude to the absolute limit. 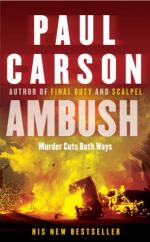