Breakneck marks the return of Detectives Mary Catherine (MC) Riggio and Kitt Lundgren, partners in the police department's Violent Crimes Bureau in industrial, blue-collar Rockford, Illinois. The two detectives are faced with tracking down a monster unlike any they have encountered before. The clean, seemingly emotionless kills leave MC and Kitt little but the growing string of victims to follow--all young adults, clean cut, kid-next-door types who've never taken a step outside the law. And this time around, it's personal for MC: The first victim is her cousin Tommy Mariano, oldest son of her favorite aunt. As MC and Kitt hunt a faceless killer, they are led deep into the cyberuniverse, where no one is who they seem and you never know who's watching. At the heart of this fast-paced thriller is the relationship between the two headstrong women, their struggle to balance their dual roles, to learn to trust, and to walk the fine line between upholding the law--and taking it into their own hands as they race to find a murderer. 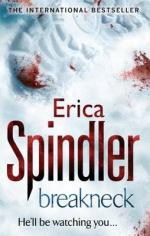