Things will never be the same again... Ben is driving on the motorway, on his usual commute to the school where he works. A day like any other, except for Adam, who in a last despairing act jumps in front of Ben's car, and in killing himself, turns the teacher's world upside down. Wracked with guilt and desperate to clear his conscience, Ben develops a friendship with Alice, Adam's widow, and her 7-year-old son Max. But as he tries to escape the trauma of the wreckage, could Ben go too far in trying to make amends? Gripping and sinister, The Wreckage is guaranteed to keep you up all night...

A brilliant study in psychological obsession, The Wreckage is smart, sinister and unpredictable. * JP Delaney * The motivations of each character are complex and dark, the narrative powerful and gripping. * Woman's Weekly Fiction * A wonderfully gripping tale - it is so original ... this psychological thriller will have you enrapt. * Woman's Weekly * Dark, complex and wonderfully gripping. * Woman Magazine * There's so much to relish...all delivered with a propulsive plot and with a terrific final twist. * Sunday Mirror * Fast-pace and told by two narrators, we wanted to carry on reading instead of going to work. * Heat Magazine * An absolutely cracking debut novel from a young writer who clearly one to watch. * Sunday People * A thoroughly compelling read you won't be able to put down. Fresh and engaging, with such well-drawn central characters. It kept me gripped, and felt realistically, messily, human. A brilliant book... such a good thriller ... splendidly creepy debut ... haunting stuff * Daily Mail * A completely riveting debut - Robin Morgan-Bentley is definitely one to watch! A twist I never saw coming, and a male main character with insecurity and vulnerability - I've never met anyone like him in a thriller before. CREEPY AND COMPELLING '...a thrilling, creep climax and a double-whammy twist. A more than promising debut.' * The Times * Artfully written, and the focus on Adam and Ben's internal conflict was a welcome reversal of stereotypes often found in psych thrillers. A page-turner and the twist at the end was one I didn't see coming -- LJ Ross An exceedingly good debut novel, that tackles serious issues with real compassion and empathy, allows the characters to draw you in and feel their pain, and keeps you guessing... -- Joy Ellis A disturbing and utterly compelling read - I loved it! * K.L. Slater, author of Blink * An exciting debut. Such a different take on things to read from a male point of view. Fresh and enthralling. * Mel Sherratt * A terrific debut exploring the vulnerabilities and co-dependency of damaged individuals. I loved the wonderfully subtle but insistent note of menace woven into the narrative, winding me into the colliding worlds of Ben and Alice and pushing me on to finish it. Clever and compelling! * Fiona Barton * Immersive, compulsive and gripping. * C.L. Taylor * Superb characterisation and a devilish twist that took me completely by surprise. * Mark Edwards * Gripping with a great twist! * Harriet Tyce, author of Blood Orange * This is a terrifying psychological thriller - credible & gut-wrenching. It takes scary to a new level. We are cunningly forced into the pit of obsession. Completely successful, an exciting new writer. I loved it. * Miriam Margolyes * The tension builds beautifully and the twist hits you like a ten-ton truck. -- Matt Nixson It doesn't feel like a first novel at all, it's written with the confidence of someone several books into their writing career. I absolutely loved Alice and her sarcasm. It's a great original idea, and the style reminded me in parts of authors like Clare Mackintosh, TM Logan and Mark Edwards. * John Marrs, author of THE ONE * This thriller is so gripping because it could happen to anyone. The Wreckage is original, intelligent and utterly compelling. I loved it. * Matt Lucas * I was completely gripped from the very first page. I absolutely loved - and loathed - the slow, steady unfolding of your worst nightmare relationship. Robin Morgan-Bentley is a master of hold-your-breath suspense. * Mel B *

After graduating from Cambridge with a First Class degree in Modern and Medieval Languages, Robin worked for five years at Google. Since 2014, he has been the Senior Editorial Manager at Audible, responsible for deciding which audiobooks they promote to their customers and how. This has given him first-hand knowledge of thepublishing industry and an extensive network of contacts, particularly authors and actors. He also runs their podcast, Audible Sessions, and has interviewed multiple authors including Fiona Barton, Clare Mackintosh, Ian Rankin, Val McDermid, Anthony Horowitz and Jeffery Deaver to name a few. His conversations with them are what inspired him ... 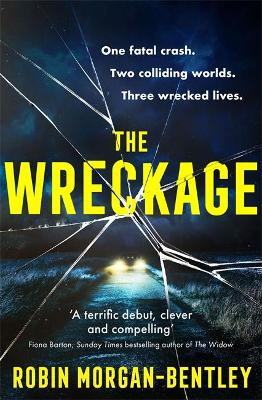