The Devil and the Dark Water Synopsis

'If you read one book this year, make sure it's this one' Daily Mail WINNER OF THE BOOKS ARE MY BAG READERS AWARD FOR FICTION SELECTED FOR THE BBC TWO BOOK CLUB BETWEEN THE COVERS AND THE RADIO 2 JO WHILEY BOOK CLUB An impossible murder A remarkable detective duo A demon who may or may not exist It's 1634 and Samuel Pipps, the world's greatest detective, is being transported from the Dutch East Indies to Amsterdam, where he is facing trial and execution for a crime he may, or may not, have committed. Travelling with him is his loyal bodyguard, Arent Hayes, who is determined to prove his friend innocent, while also on board are Sara Wessel, a noble woman with a secret, and her husband, the governor general of Batavia. But no sooner is their ship out to sea than devilry begins to blight the voyage. A strange symbol appears on the sail. A dead leper stalks the decks. Livestock are slaughtered in the night. And then the passengers hear a terrible voice whispering to them in the darkness, promising them three unholy miracles. First: an impossible pursuit. Second: an impossible theft. Third: an impossible murder. Could a demon be responsible for their misfortunes? With Pipps imprisoned, only Arent and Sara can solve a mystery that stretches back into their past and now threatens to sink the ship, killing everybody on board... 'A glorious mash-up of William Golding and Arthur Conan Doyle' Val McDermid 'A superb historical mystery: inventive, twisty, addictive and utterly beguiling ... A TRIUMPH' Will Dean From the author of the dazzling The Seven Deaths of Evelyn Hardcastle, winner of the Costa Best First Novel Award, comes an audacious and original new high concept murder mystery.

The Devil and the Dark Water Press Reviews

It's a tad Holmes and Watson, a touch Treasure Island, but there's so much else, too; the lives of women at the time, the contemporary obsession with witchcraft and most of all the authentic stink, creak, superstition and slop of life on board an Indiaman, roaring sailors and all. If you read one book this year, make sure it's this one -- Wendy Holden * Daily Mail * Brilliant... intoxicating... There are some great villains and terrific heroes, especially the gentle (and gory) giant Hayes...The Devil and the Dark Water overflows with wonderful descriptions, neat similes, and enough horror, mystery, and crime to keep anyone enthralled * Independent * Think of a Holmes and Watson-style duo operating in a Pirates Of The Caribbean-style universe, complete with a demon with a love for Faustian pacts, a secret invention called The Folly and a leper who has seemingly survived being consumed by flames ... A rollicking adventure yarn * Metro * The Devil and the Dark Water is all about narrative pleasure ... The locked room murder meets a Michael Bay movie, by way of Treasure Island; you can't know what's going on, if only because the author won't let you know until he's delivered the final surprise - and another one after that. The effect is irresistible. Turton has got his world up and running inside the first two pages; thereafter, deceptions and diversions multiply until the ultimate, outrageous reveal, at which point the dark water turns out to be rather darker than you imagined -- M John Harrison * Guardian * [Turton's] second book is an even more exuberant demonstration of his storytelling skills ... Wildly inventive, Turton's tale defies definition as either historical fiction or crime novel, but provides all the pleasures of both genres and more * Sunday Times * A rollicking tale of devils, lepers and witchfinders * Irish Times * An imaginative tour de force * Literary Review * Turton's prose is jaunty and vivid. And unlike most whodunits I wouldn't recommend it for pre-lights-out reading - not just because of the spooky bits, but because such a lovingly complex construct needs readers who are fully awake * Sunday Telegraph, Novel of the Week * A genre sampling epic that sets outrageous traps for the reader and builds an atmosphere of dread up to an operatic final twist * Financial Times * A glorious mash-up of William Golding and Arthur Conan Doyle -- Val McDermid Stunningly good. A page-turning mystery on an epic scale, intricately plotted and expertly landed -- Simon Lelic A superb historical mystery: inventive, twisty, addictive and utterly beguiling. I fell for this book (and its characters) in a big way. Beautifully crafted escapism for fans of Sherlock and Master & Commander. A TRIUMPH -- Will Dean Stuart Turton has done it again. The Devil and the Dark Water is mind bending, genre bending, intricate, vivid, intelligent and with one of the most gloriously grizzly cast of characters ever. An absolute razztwizzler of a novel! -- Ali Land The desperate life on board an Amsterdam-bound Dutch Indiamen has never been so vividly painted. Throw in a demon (who may or may not exist), a cast of beautifully realised, compelling characters along with a series of locked room mysteries and the result is one of the most extraordinary books being published this year -- M.W. Craven An absolute treat from the most original voice in crime fiction -- Ragnar Jonasson Turton ?its between characters with trademark intricacy, the plot tossing around on the high seas. Each crest and fall adds to the bewilderingly compelling story, culminating in a completely unpredictable yet thoroughly satisfying ending * i * I can think of few writers who conjure up twists and mysterious happenings with such unflagging gusto and sheer infectious pleasure ... It's a great read -- Jake Kerridge * Sunday Express *

Stuart Turton's debut novel, The Seven Deaths of Evelyn Hardcastle, won the Costa First Novel Award and the Books Are My Bag Readers Award for Best Novel, and was shortlisted for the Specsavers National Book Awards and the British Book Awards Debut of the Year. A Sunday Times bestseller for three weeks, it has been translated into over thirty languages and has also been a bestseller in Italy, Russia and Poland. Stuart lives near London with his wife and daughter. @Stu_Turton 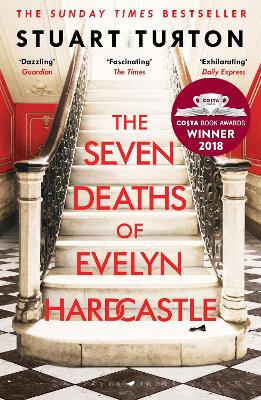 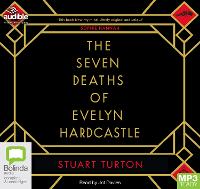 View All Books By Stuart Turton