David Kynaston's history of post-war Britain has so far taken us from the radically reforming Labour governments of the late 1940s in Austerity Britain and through the growing prosperity of Family Britain's more placid 1950s. Now Modernity Britain 1957-62 sees the coming of a new Zeitgeist as Kynaston gets up close to a turbulent era in which the speed of social change accelerated. The late 1950s to early 1960s was an action-packed, often dramatic time in which the contours of modern Britain began to take shape. These were the 'never had it so good' years, when the Carry On film series got going, and films like Room at the Top and the first soaps like Coronation Street and Z Cars brought the working class to the centre of the national frame; when CND galvanised the progressive middle class; when 'youth' emerged as a cultural force; when the Notting Hill riots made race and immigration an inescapable reality; and when 'meritocracy' became the buzz word of the day. In this period, the traditional norms of morality were perceived as under serious threat (Lady Chatterley's Lover freely on sale after the famous case), and traditional working-class culture was changing (wakes weeks in decline, the end of the maximum wage for footballers). The greatest change, though, concerned urban redevelopment: city centres were being yanked into the age of the motor car, slum clearance was intensified, and the skyline became studded with brutalist high-rise blocks. Some of this transformation was necessary, but too much would destroy communities and leave a harsh, fateful legacy. This profoundly important story of the transformation of Britain as it arrived at the brink of a new world is brilliantly told through diaries, letters newspapers and a rich haul of other sources and published in one magnificent paperback volume for the first time.

The third volume of Kynaston’s authoritative social history of post-war Britain, originally published in two volumes, is here combined. The first begins in 1957, the year that Prime Minister Harold Macmillan gave his ‘never had it so good’ speech that defined the period. The three years covered in the second volume see the transition from a world looking back to the dark days of the Second World War and rationing, to one looking forward to the space age and consumerism, with most households having televisions, and even a car. It is a wonderfully detailed and readable account of a time that paved the way for the social revolution that was the Swinging Sixties. 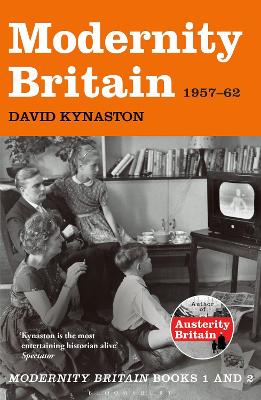 David Kynaston was born in Aldershot in 1951. He has been a professional historian since 1973 and has written eighteen books, including The City of London (1994-2001), a widely acclaimed four-volume history, and WG's Birthday Party, an account of the Gentleman v. Players match at Lord's in July 1898. He is the author of Austerity Britain 1945-51 and Family Britain 1951-57, the first two titles in a series of books covering the history of post-war Britain (1945-1979) under the collective title 'Tales of a New Jerusalem'. He is currently a visiting professor at Kingston University.