January 2012 NewGen Book of the Month.

The story's searing pace, its spare style, the excitement of its fabulously damaged world, its unforgettably vivid characters, its violent action and glorious love story make this a truly sensatonal YA debut novel.

Much of the author's inspiration came from the epic movies she grew up with, from Gone with the Wind to The Searchers to The Wizard of Oz. The novel has been optioned by Ridley Scott and screenwriter Jack Thorne is in the process of adapting it for film.

Moira Young says: “To be shortlisted with such experienced and acclaimed writers and their excellent books was wonderful. To win the Costa Children's Book Award is amazing. I am immensely gratified that the story and characters I’ve lived with and cared about for so long seem to speak not only to young people but readers of all ages.”

You can also find out more by visiting the Facebook page for this book - http://www.facebook.com/BloodRedRoadBook

MORE NEWS: Moira's publisher Scholastic have created a fabulous free newpaper for teens featuring a variety of their fantastic teen titles. Click here to have a read.

Every step of Saba's journey sizzles with danger... In a lawless land, where life is cheap and survival is hard, Saba has been brought up in isolated Silverlake. She never sees the dangers of the destructive society outside. When her twin brother is snatched by mysterious black-robed riders, she sets out on an epic quest to rescue him. 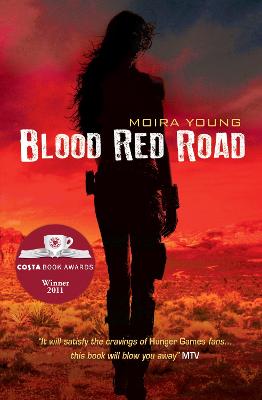