Railways of Leicestershire in the Twenty-first Century

Railways of Leicestershire in the Twenty-first Century Synopsis

A quick look at today's map of the county of Leicestershire and it's easy to see that its county town, Leicester, sits at an important railway crossroads. With London to the south and the East Midlands cities of Derby and Nottingham to the north, the line linking St Pancras and Sheffield is crossed in Leicester by one of England's most important east-west link lines. This link provides passenger rail journey opportunities to and from Birmingham to the west and the cities of Peterborough and Cambridge to the east. In addition, it is playing an increasingly important role as a freight route to and from East Anglia, including connecting the UK's largest container port at Felixstowe with a number of terminals across the country. The line between Leicester and Burton on Trent may have lost its passenger service, but it remains an important access route to the quarries in the area around Coalville. The county's railways may have been drastically pruned by the Beeching Axe, but they still have a wide variety of traffic on offer. In this book John Jackson looks at the variety of traffic at work on the county's main lines. The story is completed by a glance at today's roll of Brush's workshops in Loughborough and loco servicing and stabling facility now occupying the former depot at Leicester itself. 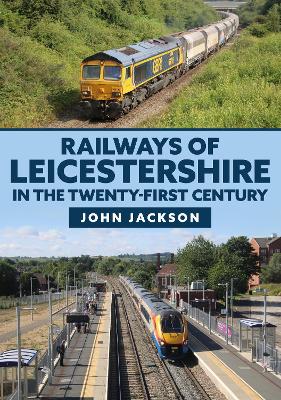 John Jackson, a lifelong transport enthusiast, opted for early retirement at the turn of the Millennium - and swapped the rat race for the rail tracks. Since then, he has travelled extensively on the British rail network with his camera as a constant companion. He continues to compile a photographic collection reflecting the UK rail industry that already extends to tens of thousands of images.

View All Books By John Jackson