Theodore Drown is a destructive. A recovering addict to weirdcore, he's keeping his head down lecturing at the university of the moon. Twenty years after the appearance of the first artificial intelligence, and humanity is stuck. The AIs or, as they preferred to be called, emergences have left Earth and reside beyond the orbit of Mercury in a Stapledon Sphere known as the university of the sun. The emergences were our future but they chose exile. All except one. Dr Easy remains, researching a single human life from beginning to end. Theodore's life. One day, Theodore is approached by freelance executive Patricia to investigate an archive of data retrieved from just before the appearance of the first emergence. The secret living in that archive will take him on an adventure through a stunted future of asylum malls, corporate bloodrooms and a secret off-world colony where Theodore must choose between creating a new future for humanity or staying true to his nature, and destroying it. File Under: Science Fiction [ Fatal Loop | Emergent See | Lunar Lunatics | Dr Easy ] 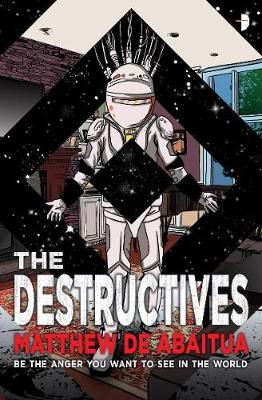 Matthew De Abaitua's novel The Red Men was shortlisted for the Arthur C Clarke Award and adapted into a short film 'Dr Easy' by Shynola and produced by Film4/Warp Films. His book Self & I: A Memoir of Literary Ambition (Eye Books, 2018) was chosen as a Financial Times Summer Read and described by The Times Literary Supplement as a compelling reminiscence . He teaches creative writing and science fiction at the University of Essex and lives in Hackney.