N.C. Wyeth's illustrations to Treasure Island and Kidnapped - first published in 1911 and 1913, respectively, by Charles Scribner's Sons - made his artistic reputation. With a bold mastery of light and colour, Wyeth brilliantly conveyed action, character, and setting, lending an extra excitement to Robert Louis Stevenson's tales of pirates and buried treasure, and intrigue in the Scottish Highlands. Now readers can enjoy this classic author-illustrator pairing in a handsome two-volume slipcased set, typeset anew and printed and bound to a high standard. This collectible set also includes a new introduction by Christine B. Podmaniczky, a leading expert on N.C. Wyeth. She reveals Wyeth's daring approach to these illustrations - which he painted at a large scale, directly on the canvas - and explores their later influence on visual culture, including stage and screen adaptations of Stevenson's novels. 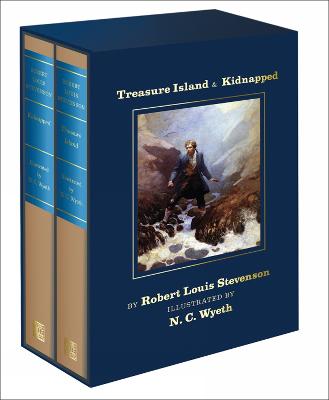 Robert Louis Stevenson was born in Scotland in 1850 and died in Samoa in 1894. He is one of the world's best-loved writers in prose and verse. N.C. Wyeth (1882-1895), the celebrated American painter and muralist, illustrated many works of classic literature. Christine B. Podmaniczky is Curator Emerita, N.C. Wyeth Catalogue Raisonne, at the Brandywine River Museum of Art. Until 2019, she was the museum's curator of N.C. Wyeth Collections and Historic Properties.