Part of the Tales of a New Jerusalem Series

For the first time, the Sunday Times bestseller Austerity Britain is available in one complete paperback volume. Coursing through Austerity Britain is an astonishing variety of voices - vivid, unselfconscious, and unaware of what the future holds. A Chingford housewife endures the tribulations of rationing; a retired schoolteacher observes during a royal visit how well-fed the Queen looks; a pernickety civil servant in Bristol is oblivious to anyone's troubles but his own. An array of working-class witnesses describe how life in post-war Britain is, with little regard for liberal niceties or the feelings of their 'betters'. Many of these voices will stay with the reader in future volumes, jostling alongside well-known figures like John Arlott (here making his first radio broadcast, still in police uniform), Glenda Jackson (taking the 11+) and Doris Lessing, newly arrived from Africa, struck by the levelling poverty of postwar Britain. David Kynaston weaves a sophisticated narrative of how the victorious 1945 Labour government shaped the political, economic and social landscape for the next three decades.Deeply researched, often amusing and always intensely entertaining and readable, the first volume of David Kynaston's ambitious history offers an entirely fresh perspective on Britain during those six momentous years. 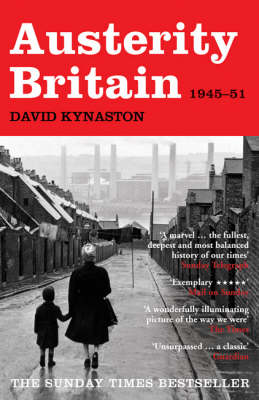 David Kynaston was born in Aldershot in 1951. He has been a professional historian since 1973 and has written fifteen books, including The City of London (1994-2001), a widely acclaimed four-volume history, and W.G.'s Birthday Party, an account of the Gentleman vs. the Players at Lord's in July 1898. He is currently a visiting professor at Kingston University.