Mary and her sister Jane have always longed for a handsome young poet to whisk them away from their mundane life. Then, in the spring of 1814, Percy Shelley walks into their father's shop, like an angel of deliverance. Seduced by Shelley's radical ideas - equality of the sexes and freedom from the binds of religion - the girls flee with him to Europe. But the life they lead together is frowned on by their family and society. Persecuted by gossip and plagued by jealousy and suspicion, Mary becomes haunted by freakish imaginings. Her children with Shelley begin to die, and though her grief threatens to overwhelm her and her marriage to Shelley, it also gives her the germ of an idea - a story. Then Shelley drowns after a foolish sailing expedition, and Mary knows that it's time to write Frankinstein .

Veronica Bennett graduated from University College, Cardiff. She was an English lecturer for several years before becoming a successfully published children's author. She lives in Middlesex. 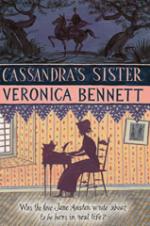 View All Books By Veronica Bennett