THE EPIC FANTASY OF THE PEOPLE OF THE WIND CONTINUES . . . Kieto's destiny, set in the heavens, is to conquer the Land-of-Mists, the mysterious island discovered by Kupe, one of the great Polynesian voyagers. But he knows it won't be easy: the wild native tribes, particularly the Scots and Picts, have two formidable advantages - iron and horses. But Kieto has heard of a magnificent warrior race, the Maori, who live in another world and from whom he hopes to learn the secret of success in war. The gateway to this world is on the island of giants, and Kieto and his friends, Boy-Girl, Seumas and Dorcha, themselves taken years before from the Land-of-Mists, leave the safety of Rarotonga and embark on an epic voyage of discovery aboard THE PRINCELY FLOWER. Pursued by sea-fairies, vengeful gods, power-hungry priests and, in Seumas's case, by a murderously angry son, confronting their worst fears and supernatural horrors, the friends finally face the awesome wrath of the mighty Maori. THE PRINCELY FLOWERS is the second wonderful volume of THE NAVIGATOR KINGS, set in the richly imaginative world of Polynesian life and myth. 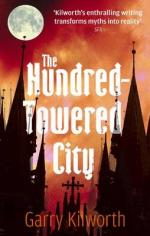 View All Books By Garry Kilworth