QI: The Book of General Ignorance - The Noticeably Stouter Edition

An indispensable compendium of popular misconceptions, misunderstandings and common mistakes culled from the hit BBC show, QI. From the bestselling authors of The Book of General Ignorance comes a noticeably stouter edition, with 26% extra facts and figures perfect for trivia, pub quiz and general knowledge enthusiasts. The QI team sets out again to show you that a lot of what you think you know is wrong. If, like Alan Davies, you still think the Henry VIII had six wives, the earth has only one moon, that George Washington was the first president of the USA, that Bangkok is the capital of Thailand, that the largest living thing is a blue whale, that Alexander Graham Bell invented the telephone, that whisky and bagpipes come from Scotland or that Mount Everest is the world's tallest mountain, then there are at least 200 reasons why this is the book for you. The researchers at QI have written many bestselling books including such titles as The QI Book of General Ignorance and 1,277 Facts To Blow Your Socks Off. They now present a noticeably stouter edition, an indispensable handbook for trivia lovers, pub quiz enthusiasts and general knowledge experts alike. And remember - everything you think you know is still wrong.

John Lloyd CBE devised The News Quiz and To the Manor Born for radio and Not The Nine O'Clock News, Spitting Image and Blackadder for television. John Mitchinson has been both bookseller and publisher and looked after authors as diverse as Haruki Murakami, The Beatles and a woman who knitted with dog hair. Together they are in charge of research for the hit BBC show QI, and have written many bestselling books, including such titles as The Book of General Ignorance, 1,227 QI Facts To Blow Your Socks Off and most recently, 1,411 QI Facts To Knock You sideways. 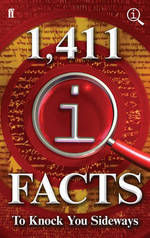