The King is dead. A nation mourns... Having clawed his way up from C-list obscurity to the pinnacle of A-list superstardom, media personality and self-proclaimed King of Saturday Night Television, Simon Peters is found dead in 'suspicious circumstances'. Deluded, self-obsessed and with an ego the size of Coventry, Simon trod on so many toes, stabbed innumerable backs and slept with a lot of the wrong people in his ever-more desperate search for fame. The bitter ex-agent, the ruthless manager, the jilted ex-girlfriend, the rival game-show host and any number of members of the viewing public who'd had to sit through his shows - each and every one had reason to hate Simon. But who would hate him enough to want to see him dead? Investigative journalist David Mulryan looks back on the career of this light entertainment legend in his search to answer the burning question: Who Killed Simon Peters? Taking you inside the mind of a man who is dying to be famous, this deliciously funny novel takes a sideways swipe at show business, slaps the face of the television industry and gives a friendly poke in the eye to our celebrity-obsessed culture.

I had to read the whole book just to make sure I got a mention...Very funny though * PETER DUNCAN * Brilliantly funny...why isn't it all about me, though? I think he should have called it 'Who Killed Toyah Wilcox?' * TOYAH WILCOX * Paul Hendy brilliantly depicts the glamour and grime of showbusiness. A laugh a page and then some * SHAUN WILLIAMSON * An hysterical, rip-roaring, celebrity yarn...Hendy has done it again! * CHRISTOPHER BIGGINS *

Paul Hendy's showbiz age is 28. Although he never made it to the C-list, he did host such TV shows as 'Don't Try This at Home' and 'Wheel of Fortune' (which had been running successfully for 20 years until Paul did a series and they cancelled it). He now focuses on directing panto. He lives in West London with his wife, daughter and Ernie the cat. The Diary of a C List Celeb was his first novel. 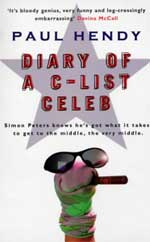 View All Books By Paul Hendy