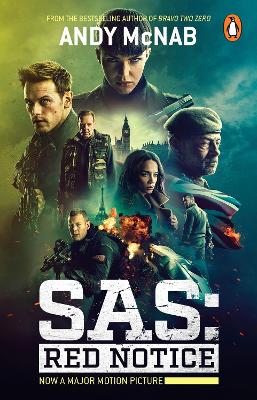 Now a Sky Original film starring Outlander's Sam Heughan, Ruby Rose, and Andy Serkis 'One of the great all-action characters of recent times. Like his creator, the ex-SAS soldier turned uber agent is unstoppable.' Daily Mirror 'Authentic to the core' Daily Express The Channel Tunnel. Your worst fears are about to come true... ____________________ Deep beneath the English Channel, a small army of vicious terrorists has seized control of the Eurostar to Paris, taken 400 hostages at gunpoint - and declared war on a government that has more than its own fair share of secrets to keep. One man stands in their way. An off-duty SAS soldier is hiding somewhere inside the train. Alone and injured, he's the only chance the passengers and crew have of getting out alive. Meet Andy McNab's explosive new creation, Sergeant Tom Buckingham, as he unleashes a whirlwind of intrigue and retribution in his attempt to stop the terrorists and save everyone on board - including Delphine, the beautiful woman he loves. ____________________ Hurtling us at breakneck speed between the Regiment's crack assault teams, Whitehall's corridors of power and the heart of the Eurotunnel action, RED NOTICE is McNab at his devastatingly authentic, pulse pounding best. What readers are saying: ***** 'Always thrilling, once started it is hard to put down until the final page.' ***** 'Constant action from beginning to end, and totally believable. The best thriller writer out there.' ***** 'As a former SAS soldier himself, his stories are full of tactical details and facts that only come with that deep connection.'

From the day he was found in a carrier bag on the steps of Guy's Hospital in London, Andy McNab has led an extraordinary life. As a teenage delinquent, Andy McNab kicked against society. As a young soldier he waged war against the IRA in the streets and fields of South Armagh. As a member of 22 SAS he was at the centre of covert operations for nine years - on five continents. During the Gulf War he commanded Bravo Two Zero, a patrol that, in the words of his commanding officer, 'will remain in regimental history for ever'. Awarded both the Distinguished Conduct Medal (DCM) and Military Medal (MM) during his military career, McNab was the British Army's most highly decorated serving soldier when he finally left the SAS. Since then Andy McNab has become one of the world's best-selling writers, drawing on his insider knowledge and experience. As well as several non-fiction bestsellers including Bravo Two Zero, the biggest selling British work of military history, he is the author of the best-selling Nick Stone and Tom Buckingham thrillers. He has also written a number of books for children. Besides his writing work, he lectures to security and intelligence agencies in both the USA and UK, works in the film industry advising Hollywood on everything from covert procedure to training civilian actors to act like soldiers. He continues to be a spokesperson and fundraiser for both military and literacy charities.

More About Andy McNab
Add To Wishlist
Buy from our bookstore and 25% of the cover price will be given to a school of your choice to buy more books.