These volumes contain biographies of the 1367 Members of the House of Commons from 1820 to 1832, surveys of elections and politics in the 383 constituencies of Great Britain and Ireland over the same period and an introduction which analyses and sets them in context. The result of more than twenty years' work in archives and libraries throughout Britain, Ireland and abroad, they constitute the most comprehensive survey of British and Irish politics during the period. Encompassing four Parliaments and general elections in 1820, 1826, 1830 and 1831, they cover the Queen Caroline affair, agricultural distress, the Whig campaign for economies and legal reforms, debates on financial and commercial policy, the emergence of liberal Toryism, colonial slavery, repeal of the Test and Corporation Acts, Catholic emancipation and parliamentary reform. The period ends with the passage of the first Reform Act, a watershed in the representative history of Britain. 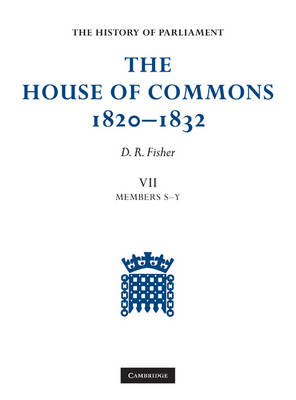 David Fisher was a contributor to the History of Parliament: the House of Commons 1790-1820 and wrote numerous articles for the Oxford Dictionary of National Biography.