A Death in Belmont

A Death in Belmont Synopsis

In the spring of 1963, the quiet suburb of Belmont, Massachusetts, is rocked by a shocking sex murder that exactly fits the pattern of the Boston Strangler. Sensing a break in the case that has paralyzed the city of Boston, the police track down a black man, Roy Smith, who cleaned the victim's house that day and left a receipt with his name on the kitchen counter. Smith is hastily convicted of the Belmont murder, but the terror of the Strangler continues. On the day of the murder, Albert DeSalvo-the man who would eventually confess in lurid detail to the Strangler's crimes-is also in Belmont, working as a carpenter at the Jungers' home. In this spare, powerful narrative, Sebastian Junger chronicles three lives that collide-and ultimately are destroyed-in the vortex of one of the first and most controversial serial murder cases in America.

A Death in Belmont Press Reviews

The perfect story... It's difficult to communicate, to those who have only read about it, the atmosphere of fear that gripped Boston during the rampage of the Boston Strangler. From 1962 to 1964, 13 women were strangled in their homes, possibly by the same killer. There was never a sign of forced entry. A horrifying crime from that time forms the background of Sebastian Junger's new book, A Death in Belmont. -- David Mehegan 4 stars... Sebastian Junger's first brush with horror came early... Wondering if DeSalvo may have killed his neighbor, Junger exhumes the evidence in both cases. He recounts the crimes and trials and interviews witnesses, including his parents. As he goes deeper, the story becomes that much more awful, a commentary on racial assumptions and the illusion of suburban safety. -- William Georgiades In DeSalvo's dark world, Junger's clear, beautifully reasonable writing is the literary equivalent of night-vision goggles... He's navigating a maze of shadows, and you can see all the more clearly what an enormously skillful prose artist he is. -- Lev Grossman Junger returns to the time and place of his earliest memories, and pieces together a remarkable and disturbing tale about crime and justice in America. You get the sense that this story has been incubating for a long time, and Junger's painstakingly researched and carefully reported book, with its clear, straightforward prose, has the dramatic power of a great novel... Junger has produced a terrific and provocative book that addresses such subjects as race, crime, our notions of justice and the mysteries of criminal pathology without ever losing its narrative drive. It would be difficult, in fact, to find a recent American novel that says as much about so many of the important issues of our time, and says it so compellingly. -- Brad Zellar With the same attention to detail he displayed in his previous bestseller The Perfect Storm, Junger looks at criminal prosecution in the decades before CSI would prompt juries to demand scientific evidence before sending a suspected killer to jail. And he raises questions about race in Boston in the 1960s... Junger's book is a riveting read. -- Michele McPhee Riveting... a worthy sequel to The Perfect Storm. -- Alan M. Dershowitz

Sebastian Junger is the author of A Death in Belmont and Fire. He has been awarded a National Magazine Award and an SAIS Novartis Prize for journalism. Most recently, he has been reporting on the war in Afghanistan for Vanity Fair. He lives in New York City. 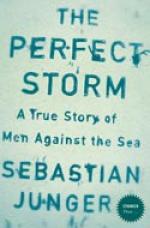