How Much of These Hills is Gold

How Much of These Hills is Gold Synopsis

'A truly gifted writer' Sebastian Barry 'Pure gold' Emma Donoghue 'Remarkable' Chigozie Obioma WHAT MAKES A HOME A HOME? TELL ME A STORY I CAN DREAM ON . . . Ba dies in the night, Ma is already gone. Lucy and Sam, twelve and eleven, are suddenly alone and on the run. With their father's body on their backs, they roam an unforgiving landscape dotted with giant buffalo bones and tiger paw prints, searching for a place to give him a proper burial. Once Lucy and Sam have made it out of the wild, they are changed forever. Sam chooses to live in their father's shadow, while Luck breaks free. Taking their own paths in the American West, in the twilight of the Gold Rush, encountering a cast of menacing characters: a fur trapper in exile, a charismatic brothel owner and a debutante from the upper echelons of society, each either sidesteps or falls victim to the new gods of greed, wealth and opportunism. Eventually, the siblings pull apart and come together for a final reckoning. How Much of These Hills Is Gold is a sweeping adventure tale, an unforgettable sibling story and a remarkable novel about family, bound and divided by its memories. 'Dazzling' Daisy Johnson 'A wonder' Garth Greenwell 'Ferocious, dark and gleaming' Lauren Groff

How Much of These Hills is Gold Press Reviews

Born in Beijing but mostly an artifact of the United States, C Pam Zhang has lived in thirteen cities and is still looking for home. She's been awarded fellowships and scholarships from organisations including Bread Loaf, Tin House and Aspen Words. Her work appears in Kenyon Review, McSweeney's Quarterly, Tin House and elsewhere. She currently lives in San Francisco. 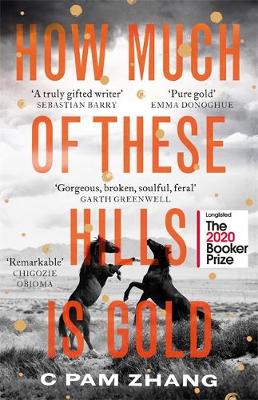