The Translation of the Bones

The Translation of the Bones Synopsis

Reality or delusion? Fantasy or fact? When word gets out that Mary-Margaret O'Reilly, a slow-witted but apparently harmless young woman, may have been witness to a miracle, religious mania descends on the Church of the Sacred Heart in Battersea. The consequences will be profound, not only for Mary-Margaret but for others too - Father Diamond, the parish priest, who is in the midst of his own crisis of faith, and Stella Morrison, adrift in her marriage and aching for her ten-year old son, away at boarding school. In the same parish Alice Armitage counts the days until her soldier son comes home from Afghanistan, and Mary-Margaret's mother, Fidelma, imprisoned in a tower block, stares out over London with nothing but her thoughts for company. Remembering her early childhood by the sea in Ireland, the bleak institution she was sent to and the boy she loved, she hungers for consoling touch. In the meantime Mary-Margaret's quest grows increasingly desperate. But no one is prepared for the shocking outcome that ensues. The Translation of the Bones is a searingly powerful novel about passion and isolation, about the nature of belief, about love and motherhood and a search for truth.

The Translation of the Bones Press Reviews

If Francesca Kay's second novel were a piece of music, it would be a requiem, finding the poetry, perhaps even the glory, in loss and despair. Which is not to say that her novel is depressing or gloomy - far from it. In its depiction of a community grappling with the pain of what it means to be human, it is a novel which manages to be both poignant and uplifting...as lyrical as Kay's debut, An Equal Stillness...you don't have to be religious to be moved by Kay's elegantly calibrated writing. -- Lucy Beresford THE SUNDAY TELEGRAPH Rich in the same verbal artistry and emotional finesse as her debut, The Translation of the Bones does not disappoint...With its finely worked tapestry of voices and viewpoints, its keen-eyed pleasure in the contrasts of inner-urban life, its lyrical excursions into memory and yearning, The Translation of the Bones sharpens the reader's mind - and stretches its sympathies - rather than drenching it in mystical mawkishness. Both Spark and Greene would surely say amen to that. -- Boyd Tonkin THE INDEPENDENT unfailingly gripping, filled with the essential ingredients - tension and emotion. -- Patricia Duncker LITERARY REVIEW The Translation of the Bones, Francesca Kay's second novel, is a well-tempered exploration of the haphazard, the religious and the mad...in beautifully musical sentences with carefully judged rhythms -- Philip Womack THE DAILY TELEGRAPH You do not need to share the beliefs of Kay's characters to be deeply affected by their stories...skillfully constructed and beautifully written...as much concerned with common humanity as it is with individual faith. -- Peter Parker SUNDAY TIMES In this novel about the people and things we keep locked away we encounter those locked in their own worlds, those locked up and the feelings we hide inside, too fearful to show. Francesca Kay is the author of the stunningly beautiful debut An Equal Stillness and this second novel is tinged with the same bittersweet melancholy that pervaded the first...The writing is intense and exquisite -- Caroline Jowett DAILY EXPRESS Kay's writing is rich and luscious without being overblown, conjuring images of ancient rituals, feast days and old beliefs, flowers, magic, miracles and spells . Fildema's past is depicted with an intriguing tenderness, as in the image of her and her lost lover shaking like two birds tumbled in a storm after a secret coupling. By contrast , Fidelma's descent int o a life of poverty and single motherhood is portrayed starkly - jumble sales and council offices and tricks in the backs of cars for cash . By alternating between vivid often religious imagery and simple, economical language, Kay maintains the momentum in a story that is more often about the characters' inner worlds than their actions or experiences...elegantly written -- Catherine Scott TLS though Kay's novel is emotional, it's not sentimental and it never lingers on the spot. This combination of feeling and structural restraint seems rather new FINANCIAL TIMES Mary-Margaret is witness to a miracle in her local church, but shocking revelations shake her community to the core. Absorbing read. WOMAN'S OWN Kay's challenging but very readable novel invites the reader to look behind the doors of the church, posing difficult questions about the value of religion as a mandate for living. WE LOVE THIS BOOK beautifully written OXFORD TIMES Superbly drawn characters people this powerful novel that memorably explores facets of love, grief, isolation and belief. CHOICE MAGAZINE [Kay's] new book fulfils the promise of her first being a work of great poise, sensitivity and intelligence...This is a moving book about faith, belief and love, isolation, loneliness and passion, and about motherhood, too...every strand is given its due weight, carefully balanced and controlled, while the overall emotional pitch is not mawkish or sentimental but fitting and of a compelling integrity. It's a book that shouldn't be rushed...Elegant, sad, poignant, it's a very fine piece of work CORNFLOWERBOOKS.CO.UK The author shows us that parental love constantly encounters difficulty; and that the task of priest and religious is the hardest of all. That she should write about such a theme marks her out as daring; and that she writes about it so penetratingly shows her to be wise... Francesca Kay reveals herself as a compassionate and truthful artist in this, her second novel -- Alexander Lucie-Smith CHURCH TIMES This is another hugely satisfying follow-up to a superb debut - the Orange New Writers' Award-winning An Equal Stillness - but where that book was ethereally beautiful, this offers a down-to-earth poignancy in its comparison of religious ideals and the practicalities of belief -- Jonathan Ruppin Francesca Kay raises interesting questions about the nature of love, faith and isolation...this is an eloquent novel of unusual grace...Kay understands and empathises with those who populate her world, ensuring that the reader does too...The Translation of the Bones draws attention to the world that surrounds us on a daily basis in a way we may not have thought or been challenged to look at it it before TheBookbag.co.uk

Francesca Kay grew up in South-east Asia and India and has subsequently lived in Jamaica, the United States and Germany. Her first novel, An Equal Stillness, won the Orange Award for New Writers, and was shortlisted for the Authors' Club First Novel Award and and for Best First Book in the Commonwealth Writers' Prize (Europe & South Asia region). She lives with her family in Oxford. 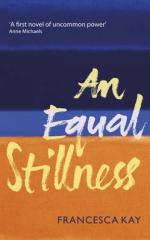