Part of the The Recursion series Series

Society in the twenty-third century runs smoothly and peacefully with the aid of Social Care operatives such as Judy 3. Meanwhile benevolent AIs, under the control of the near mythical Watcher, seem to have solved all mankind's problems, and with their aid humans have begun to explore the surrounding universe. But why does every AI that visits the planet Gateway commit suicide within just hours of arriving there? Justinian Sibelius has now himself arrived on the planet to try and find a reason. Yet how can someone with merely human intelligence solve a puzzle that has defeated minds far greater than his own - even that of the Watcher itself? And what if it should turn out that the Watcher is not so benevolent as people once believed? 'An exceptional first novel. A new British star has arrived to join the likes of Hamilton, Reynolds and Banks' Vector

Tony Ballantyne was born in County Durham and now lives in the Manchester area with his wife and two children. He contributed to publications as diverse as Interzone, My Weekly and Private Eye before publication of his first novel Recursion. This is his second. 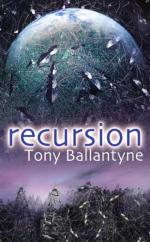