Includes a new foreword by the author and a preface by Douglas Hofstadter. Alan Turing was the extraordinary Cambridge mathematician who masterminded the cracking of the German Enigma ciphers and transformed the Second World War. But his vision went far beyond this crucial achievement. Before the war he had formulated the concept of the universal machine, and in 1945 he turned this into the first design for a digital computer. Turing's far-sighted plans for the digital era forged ahead into a vision for Artificial Intelligence. However, in 1952 his homosexuality rendered him a criminal and he was subjected to humiliating treatment. In 1954, aged 41, Alan Turing committed suicide and one of Britain's greatest scientific minds was lost.

Andrew Hodges is Tutor in Mathematics at Wadham College, Oxford University. His classic text of 1983, since translated into several languages, created a new kind of biography, with mathematics, science, computing, war history, philosophy and gay liberation woven into a single personal narrative. He is an active contributor to the mathematics of fundamental physics, as a follower of Roger Penrose. See www.turing.org.uk for further material. 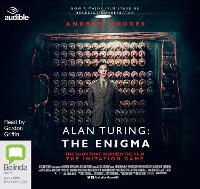 View All Books By Andrew Hodges