She only looked away for a second... That's all it took for Anne White to lose sight of her young daughter But seven years later, Abigail is found. And as Anne struggles to connect with her teenage daughter, she begins to question how much Abigail remembers about the day she disappeared... Addictive, edge-of-your-seat dark women's fiction perfect for fans of Jodi Picoult, Liane Moriarty, and Emma Donoghue's Room. 'Breathtaking suspense. A phenomenal talent' HOLLY SEDDON 'Terrifically engaging' JO SPAIN 'Addictive. I couldn't put it down' PHOEBE MORGAN 'A heart-thumping, racing thriller' CHRISTINA McDONALD

'Breathtaking suspense, laser-precise observations and a mystery from which I could not look away. A phenomenal talent' Holly Seddon 'Terrifically well-written and engaging' Jo Spain 'Grabs you deftly and then burns to a searing conclusion' Alice Clark-Platts 'WOW - what a debut! Beautiful detail, atmospheric and emotional - this is a stunning book you won't want to miss' Suzy K Quinn 'Addictive - brilliantly written and incredibly tense. I couldn't put it down!' Phoebe Morgan 'Emotionally taut, poignant and raw. A heart-thumping, racing thriller' Christina McDonald.

Philippa East works as a Clinical Psychologist and therapist. She lives in Lincolnshire with her husband and cat. Philippa's prize-winning short stories have been published in various literary journals and Little White Lies is her debut novel. 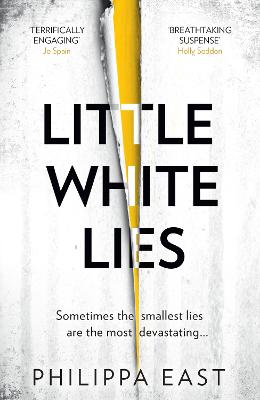 View All Books By Philippa East