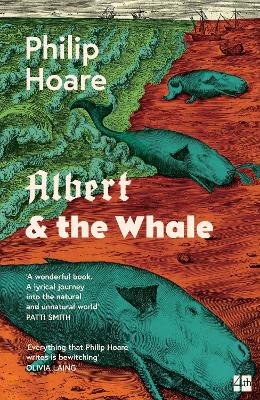 A NEW STATESMAN BOOK OF THE YEAR

An illuminating exploration of the intersection between life, art and the sea from the award-winning author of Leviathan.

'This is a wonderful book. A lyrical journey into the natural and unnatural world' Patti Smith

Albrecht Durer changed the way we saw nature through art. From his prints in 1498 of the plague ridden Apocalypse - the first works mass produced by any artist - to his hyper-real images of animals and plants, his art was a revelation: it showed us who we are but it also foresaw our future. It is a vision that remains startlingly powerful and seductive, even now.

In Albert & the Whale, Philip Hoare sets out to discover why Durer's art endures. He encounters medieval alchemists and modernist poets, eccentric emperors and queer soul rebels, ambassadorial whales and enigmatic pop artists. He witnesses the miraculous birth of Durer's fantastical rhinoceros and his hermaphroditic hare, and he traces the fate of the star-crossed leviathan that the artist pursued. And as the author swims from Europe to America and beyond, these prophetic artists and downed angels provoke awkward questions. What is natural or unnatural? Is art a fatal contract? Or does it in fact have the power to save us?

With its wild and watery adventures, its witty accounts of amazing cultural lives and its delight in the fragile beauty of the natural world, Albert & the Whale offers glorious, inspiring insights into a great artist, and his unerring, sometimes disturbing gaze.

Praise for Albert and the Whale

'In Albert & the Whale he leads his readers off on a marvellously varied, vividly imaginative, seductively digressive adventure that traces the path of another colossus...

this is a book to immerse you' The Times, Book of the Week, Rachel Campell-Johnston

'Marvellous, unaccountable book. This is a book like the stomach of a whale: capaciously ready to accommodate whatever disparate stuff comes its way' Literary Review

'Philip Hoare, best know for Leviathan, his discursive and personal book about whales, has written a very Sebaldian new book. In it, he traverses his own patch and sniffs out an assortment of seemingly unrelated themes - Albrecht Durer, cetaceans, Thomas Mann and David Bowie, a deformation of the hand, the death of his mother - and proceeds to reveal the single degree of separation between them... Enlightening' Michael Prodger, Sunday Times

'Visionary: a tone poem put together from the lives of others, with detailed use of archives' Financial Times

'Mr Hoare's portrait glitters with arresting details ... His readings of Durer's work grow woozy with enthusiasm, dissolving into a kind of modernist poetry. Readers who prefer their art history to have both feet on the ground might be unmoored; others will be intoxicated' Economist

'It's a summary-defying blend of art history, biography, nature writing and memoir ... you can feel the delight he takes in being unbound by anything but his enthusiasms. He is alternately precise and concealing. His biographical sections are both elliptical and redolent of entire lives. His art criticism is often stirring' New York Times

Philip Hoare was born and brought up in Southampton. At college in London in 1976, he became involved in the punk movement, returning to Southampton to produce fanzines, manage groups and design album sleeves. After working for Virgin and Rough Trade, he set up his own independent label in Hackney, releasing records by 23 Skidoo and the Pale Fountains, and managed Max, the group formed by Kevin Mooney of Adam & the Ants.

In 1990 Philip Hoare published his first book, Serious Pleasures: The Life of Stephen Tennant, an account of the outrageous and reclusive Wiltshire aristocrat which appeared on bestseller lists on both sides of the Atlantic. Reviewing it for the New York Times, film director John Waters called it 'witty and amazing…both scholarly and hilarious at the same time'. Noel Coward: A Biography, (1995) was acclaimed by Sheridan Morley as 'the definitive biography', and reviewing Wilde's Last Stand: Decadence, Conspiracy & the First World War (1997) Simon Callow wrote in the Sunday Times: 'Hoare has identified one of the key moments in the formation of the modern world, and he has documented it with dazzling brilliance.'

Hoare was consultant to the BBC2 Arena: Noel Coward Trilogy of three one-hour films broadcast over Easter 1998 in the UK, and in January 1999 on PBS in the US. He has lectured at literary festivals in Birmingham, Cheltenham and Charleston, at the National Portrait and Tate galleries, and the Royal Festival Hall on subjects ranging from punk rock to Noel Coward. In 1998, together with Neil Tennant of the Pet Shop Boys, he curated an exhibition of photographs of Coward as part of the Twentieth-Century Blues project, at the NPG and the Photographer's Gallery. He also appeared in the BBC Omnibus film on Oscar Wilde, and was script consultant to BBC Knowledge's recent Wilde Night. In November 1998, his film for the BBC2 series, Travels With Pevsner, was praised as 'masterful' by John Preston in the Sunday Telegraph. In summer 1999 he co-curated Icons of Pop at the National Portrait Gallery, an exhibition of British pop photography which drew a record 226,000 visitors to the gallery.

Hoare has also appeared on BBC2's Newsnight and CNN's Larry King Show. He has made many appearances on radio, contributing to and presenting programmes for BBC Radio 4, and is a regular contributor to the Independent, Guardian and Times Literary Supplement. His latest work of non-fiction, Spike Island, was published by Fourth Estate in 2001. He divides his time between London and Southampton.


More About Philip Hoare
Add To Wishlist
Buy from our bookstore and 25% of the cover price will be given to a school of your choice to buy more books.

Will Smith and 1 more